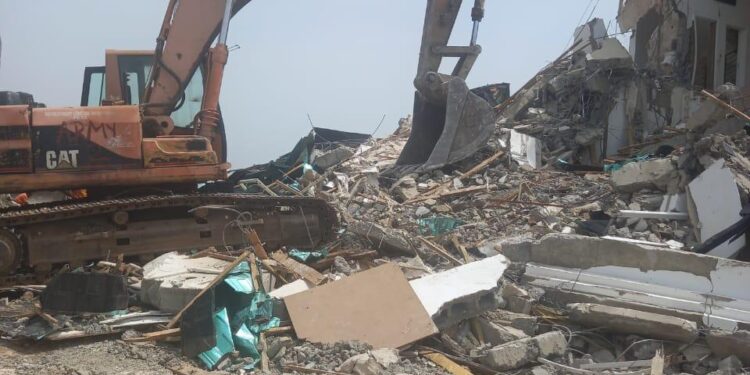 The Federal Capital Territory Administration (FCTA) has affirmed not to back down from its planned demolition of all estates illegally erected on waterways.

This is as the Federal Capital Territory (FCT) was negatively mentioned in the 2022 Annual Flood Outlook.

Umar said, “By next week all these houses are going down.The solution to this is the removal of these houses. We won’t like ourselves at the detriment of others.

Meanwhile, the Director of Department of Development Control, Tlp Muktar Galadima who led a demolition squad to one of the offending Estates, in Lugbe District, said it was appalling that developers were jeopardising peoples lives.

He hinted that the Valley Hub estate in Lugbe that is already under the fire of angry bulldozers, violated development rules, by illegally expanding and building on green area.

He also said that over 20 houses built along waterways at Trademore Estate and others would be demolished as scheduled, after the ultimatum given to them.

Galadima said, “Now is the moment, those houses marked for removal are going. Anything that would come after can be resolved. The first thing now is to save lives and properties.

” This demolition will not only be limited to Trade More estate, even the down stream we are going to remove all the houses that are on the flood plain “.

However, a representative of Trademore Estate, Arc. Ifeanyi Uzoigwe, said there was need for FCTA to evaluate a dam located at Alieta, a community before Lugbe, which has collapsed and is contributing to the flooding.

Uzuigwe also added some of the water channels within the area, need to be expanded urgently.