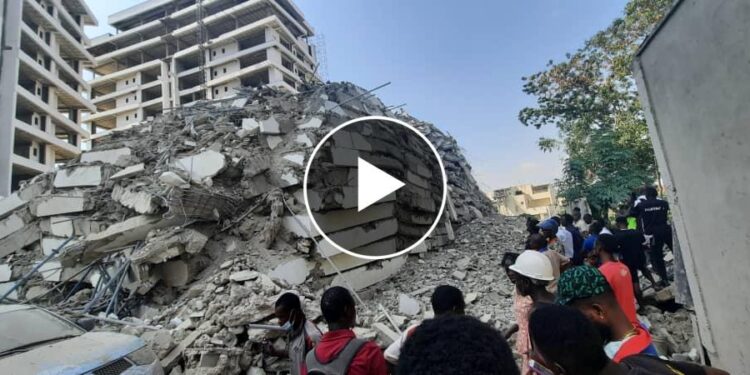 “I thought it was an earthquake when I rushed out of my apartment just after 3 p.m. I felt the building move and knew something was wrong,” Olu Apata, a nearby resident and the president of the Nigerian Bar Association, told CNN.
Apata said the building has been under construction for the past two years and that the developer was at the site meeting with prospective buyers earlier on Monday.
Hours after the collapse, hundreds of people were milling around the site, helplessly surveying slabs of concrete piled high in a heap. Locals were digging through the wreckage by hand.
Some in the crowd were furious that an official emergency response had not started.

Instead, rescue efforts were being carried out by passersby such as Rashid Olamilekan, who told CNN he pulled three construction workers from the rubble. “I am a Nigerian. I have to rescue my people,” he said. The rescued workers had been taken to the hospital, Olamilekan added.
The Nigerian Red Cross is also now at the scene.
Building collapses are a relatively common occurrence in Lagos, Nigeria’s largest city with a population of around 20 million people.
In 2019, the collapse of two separate buildings, including one housing a school, left dozens of people dead.
An expert told CNN at the time that more than 1,000 buildings were at risk of collapsing in Lagos.