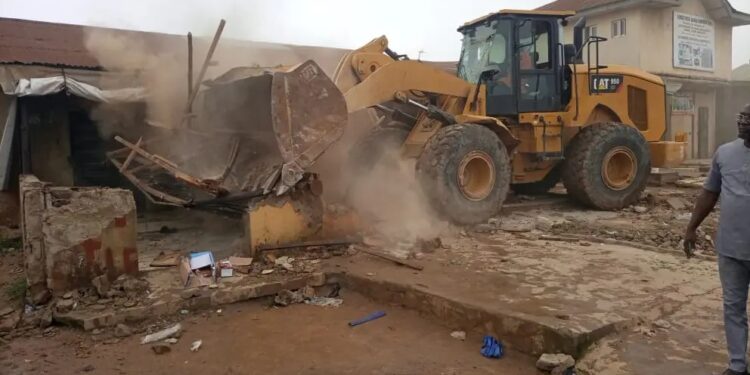 To restore the integrity of the Master Plan of Abuja, the nation’s capital city, the Federal Capital Territory (FCT) Ministerial Task team on City Sanitation demolished the Dutse Makaranta, Sokale, and Kubwa F01 axis of the Bwari-Dutse route on Wednesday.

Owners and inhabitants of unlawful constructions, including scavengers, in these settlements and along the Bwari-Dutse road corridors were targeted by FCTA bulldozers escorted by Task team security personnel.

Some of the structures demolished included illegal shops, car wash marts, and attachments belonging to E-Fountains Event Centre, Total Child Model Schools, Salvation Teaching Centre, and Khalad International Schools, all of which were located around Sagwari Layout and Sokale on the busy Bwari-Dutse road.

The illegal partaker dumpsite in Jabu layout within Kubwa FO1 was also dismantled, as was Nino prestige Lounge on waterways and traffic corridors in the neighbourhood.

Comrade Ikharo Attah, the Taskteam’s leader, stated that all of the properties impacted had no legitimate title, but had been significantly built on and conscripted the road corridors over the years, turning the area into notorious marketplaces.
According to him; “Today, we came into the Dutse-Alhaji and Kubwa axis, containing clear illegalities notorious for heavy traffic gridlock in the area.
So we are here to clear this alignment and remove all of these properties that breached the Abuja Masterplan.
“We also took a downward stretch towards Dutse Makaranta, in which we could not finish removing many illegal structures around the alignment there, but we are hopeful that we will come back to continue the cleanup exercise here.

“And we also went to clear some very terrible criminals’ den, where scavengers occupied inside part of Kubwa FO1, removal of the structures is aimed at restoring the Abuja Masterplan, and all those who live in Kubwa here will be very happy, as the extreme gridlock that’s known to here will all disappear.”

He continued: ” “It’s pathetic because everyone here got notice, but they just sat down, as they don’t care, and we can’t continue living like this.

” What pains me most is that we gave notice, and I even insisted that the Development Control Department give a second notice. So they gave first and second notices, but people wiped them off, believing that the government would not come, and that’s hurting me”.

Similarly, the Secretary, FCT Security Command and Control Centre, Peter Olumuji, explained that “this part of Kubwa FO1 is a new developing site which harbours a lot of scavengers.

“And this axis once it’s 7 pm, you can’t have thorough fair here, because hoodlums always attack anybody passing through this road, some few years ago, they killed a policeman, and stabbed another there, using different dangerous weapons, that’s why we have come to rid the place such criminal elements there.”
One of the landlords in Dutse Sokale, Mr. Augustine Olorintoba, described the exercise as a very good one, saying this will help to keep Abuja clean.

“Abuja has to be clean and decent, we landlords of Dutse Sokale are very happy, because most of our drainages have been blocked, and water is not going through.

“We appreciate the FCT Minister for his commitment to making Abuja clean. The area is looking fine, but one thing we will ask is to ensure that there is no roadside trading particularly around this Sokale junction because the activities are causing traffic gridlock here particularly at night,” he stressed.