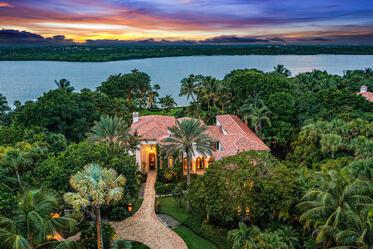 Reports circulating through the conservative blogosphere and social media accounts that House Speaker Nancy Pelosi is buying a $25 million Jupiter Island mansion are, well, fake news.
According to palmbeachpost.com, the mansion in question is at 429 S. Beach Road on the exclusive area that is home to such celebrities as golfer Tiger Woods, singer Celine Dion and country music star Alan Jackson.
“There is zero association between the seller of the home, the buyer of the home and Nancy Pelosi,” said Rob Thomson, owner of Waterfront Properties.
Thomson should know. He represents the unnamed buyer of the mansion in question.
The buyer of the house is an existing resident of the Admirals Cove community in Jupiter, Thomson said.
Another Jupiter Island home, 312 S. Beach Road, that just went under contract for $19,995,000 also is not being purchased by Pelosi, Thomson said.
That buyer is an existing Jupiter Island resident, said Thomson, who represented the seller. He said he has met the buyer and the buyer is not Pelosi, either.
Both sales close at the end of the month, he added.
However, a Fact check show that House Speaker, Nancy Pelosi isn’t worth $196 million
“Nancy Pelosi has no connection to either property,” Thomson said.
The terms “Pelosi Florida mansion,” “nancy pelosi Florida mansion” and “jupiter island” were trending on Google search in Florida late Tuesday and much of Wednesday.
Though, Pelosi is one of the richest members of Congress, check by USA Today reviewed Pelosi financial reports earlier this year and determined she has a net worth of about $106 million.
Financial disclosures show that Pelosi and her husband, Paul Pelosi, who owns and operates a San Francisco-based investment firm, have millions of dollars in real estate investments, business partnerships and stock holdings.
She owns a Napa, California home and vineyard worth between $5 million and $25 million and generated between $100,001 and $1 million in income from grape sales, according to a 2019 financial report.
Speaker of the House Nancy Pelosi, D-Calif., is one of the richest members of Congress with an estimated net worth of about $106 million.
The couple also owns several commercial properties that generate rental income in that same range and hold investments in undeveloped real estate.

While assets listed on the form total between $57 million and $271 million, liabilities range from $20 million to $97 million. Liabilities include multimillion-dollar mortgages on several properties and equity credit lines.
Pelosi has been in Congress since 1987 when members were paid $89,500. Today, as speaker, Pelosi earns $223,500.