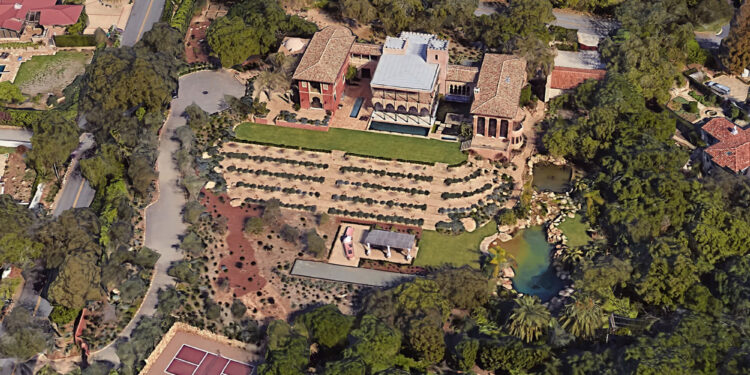 American comedian and television host, Ellen DeGeneres is pushing up her real estate capacities as she reportedly closes deal on a $20.95 million expansive estate on the Southern California coast outside of Santa Barbara.

The 2.45-acre property is located in the celebrity-favored hot spot Montecito. The nearly 12,000-square-foot mansion first appeared on the market in late 2019 for $35 million. It reappeared in April 2021 for the markedly lower price of $24.85 million, which was cut again in January to $21.5 million.

With a design based on the Alhambra palace in Granada, Spain, the home has a distinctly Moorish vibes, including slender columns, horseshoe arches and tilework throughout, listing photos show. There’s also a rotunda entryway with a hand-carved marble fountain, a wood-coffered library, steel Corinthian columns, hammam-inspired bathrooms and antique tiled-floors with radiant heat, according to The Journal.

According to Mansion Global, the home was built in 2014 for Kinka Usher, 62, a director of television commercials, the article said. Mr. Usher was inspired by the Alhambra, which was built primarily between 1238 and 1358, on a childhood trip to Spain.

Mr. Usher bought the underlying property in 2010 for $5.8 million, records from PropertyShark show. He spent two years and many millions building the house, sketching the designs himself, he told The Journal. Almost all the floors were imported from Europe, and he had a swimming pond created on the grounds to the tune of about $400,000.

Ms. DeGeneres, whose eponymous talk show is set to end this year after 19 seasons, and her wife, 49-year-old actor Portia de Rossi, are no strangers to Montecito. They bought comedian Dennis Miller’s 4-acre estate there for $49 million in December 2020, and listed their Bali-inspired estate there for nearly $40 million a few months earlier.