According to reports, 88% of Texas electricity is supplied by natural gas and coal power plants; the electrical grid was deregulated, privatized, and removed from interconnected networks to avoid federal regulation.

“Nearly 200million Americans are in the path of a dangerous storm system, with warnings and alerts now stretching from the Mexican border all the way to Maine. About 70% of the continental is now covered in snow. That is the highest in a decade. Nowhere is harder hit than Texas, where more than three million homes and businesses are without power and heat. The electrical grid simply can’t handle the demand. Officials imposed rolling blackouts saying the lack of energy is due in part to frozen wind turbines in West Texas knocked offline, with pipes freezing and bursting across the state.”

Although power was restored in Mexico, the unprecedented effects of the storm has left millions of Texans in the dark and at the mercy of the freezing cold, as it continues hamper sales, distribution and transportation, also forcing the closure of U.S. refineries, oil wells and meat plants. People are lining up by the hundreds at gas stations and grocery stores. 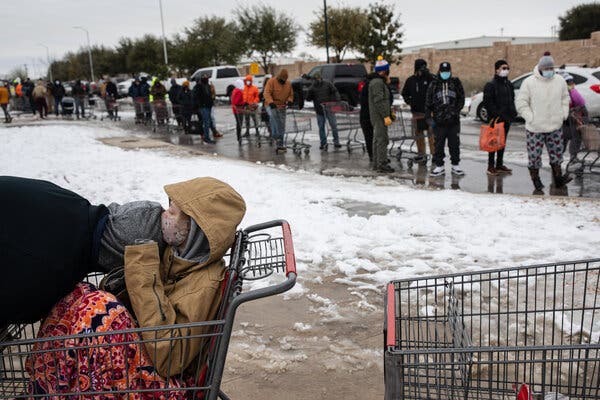 The blackouts, so far, has spread through Louisiana, Galveston, Houston, North Dakota, Arkansas, and eastern Canada. Refineries have halted the output of diesel and gasoline, shutting more than a million barrels a day of oil and 10 billion cubic feet of gas production.

Texas Governor, Greg Abbott stated: “Due to the severe weather and freezing temperatures across our state, many power companies have been unable to generate power, whether it’s from coal, natural gas, or wind power. ERCOT and the PUC are working non-stop to restore power supply. The state has also deployed resources to assist Texans without power and to help essential workers continue to carry out their jobs. In the meantime, I encourage all Texans to continue to stay off the roads, and conserve energy as state agencies work with private providers to restore power as quickly as possible.”

The governor has found himself under intense scrutiny resulting from his alleged “mishandling” of mass power outages in the state caused by harsh winter weather conditions, as he blames solar and wind for the power outages with much reference to the “Green New Deal”.

The frozen wind turbines caused some GOP politicians to declare Texas relies too much on renewable energy, but according to the Texas Tribune, “lost wind power makes up only a fraction of the reduction in power-generating capacity that has brought outages to millions of Texans.”

Although officials don’t know when the power would be restored, Texans have been warned against taking dangerous measures to stay warm during power outages.