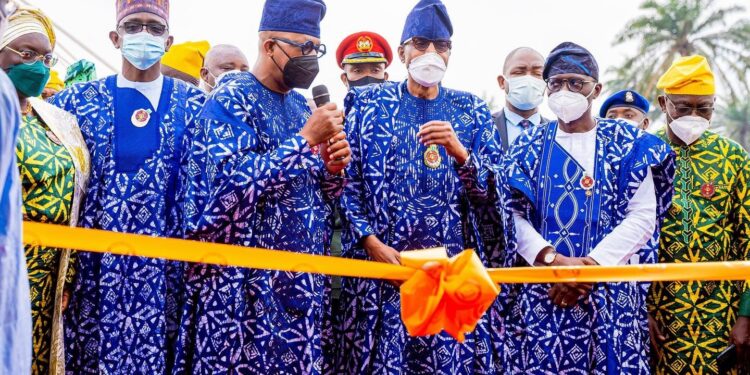 The President of the Federal Republic of Nigeria, Mohammadu Buhari has commissioned 527 units of affordable housing project located at Kobape in Obafemi Owode Local Government Area of Ogun State.

President Buhari, while commissioning the estate, said the initiative of the State Governor, Prince Dapo Abiodun would reduce the housing deficit, enjoining other States to emulate such drive to give succour to the people.

Recall that the government had on Thursday, July 1, 2021, inaugurated 130 housing units in ‘Prince Court Estate” located at Kemta, Idi-Aba, Abeokuta, marking the first phase of the 300 detached and semi-detached of two and three-bedroom structures.
This was the first in the series of housing projects being undertaken by the present administration across the state as part of the 2,500 houses to be provided in four years.

This ‘Prince Court Estate’ has been provided with amenities, such as tarred roads, water supply, good drainage system, perimeter fence, security and power supply, a model that has become incumbent on the current administration’s wholesome design for “Greater Abeokuta” as a befitting capital city.
The housing projects of 527 units of a low and medium Housing Scheme at Kobape and 83 duplexes at the Kings Court Estate at Oke Mosan in Abeokuta, the state capital are part of the Dapo Abiodun’s administration’s resolve to vigorously reduce the housing deficit in the state.

Speaking, Governor Abiodun pointed out that the housing project was one of the many his administration had done in places like Idi-Aba in Abeokuta, Sagamu, Ijebu-Ode, Ilaro and Ota to cater for both low and middle-income earners.
The Governor added that “our housing project is carried out through direct labour to create employment opportunities for the youth in the area, and it has changed the landscape and the commercial activities in the areas”.
On the Ijebu-Ode-Mojoda-Epe road, Abiodun said it would help in the industrialisation drive of his administration and also decongest the Lagos-Ibadan expressway.
Speaking earlier, Commissioner for Housing, Jagunmolu Akande Omoniyi stated that the provision of affordable houses was in phases, assuring subscribers that the government would build more houses to accommodate others.
Speaking on behalf of the artisans who were involved in the construction of the estate, Mr. Akinwande Anjorin appreciated the Governor for counting them worthy to be part of the success story.