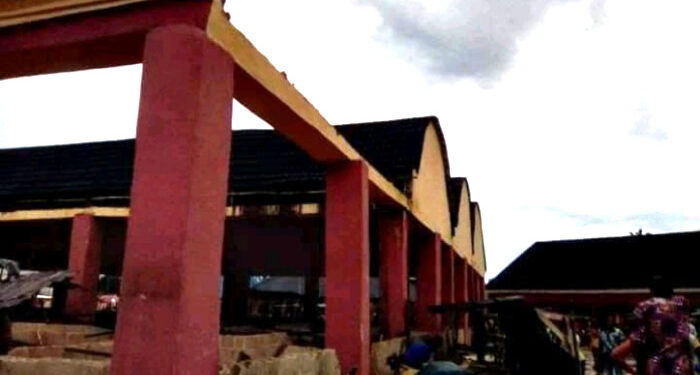 Three persons have been confirmed dead while two others were injured following the collapse of a building in Ekeaja market in Uburu community of Ohaozara Local Government Area of Ebonyi State.

The incident occurred over the weekend evening during rainfall in the area.

Report said the roof of the building, collapsed on the people taking refuge, leading to their death.

Governor David Umahi on Saturday confirmed the incident through a statement issued by his Special Assistant (SA) on Media and Publicity, Mr Francis Nwaze.

Umahi described the incident as disturbing, unfortunate and catastrophic.

While sympathising with the families of the deceased, Umahi ordered a thorough investigation into the incident to unravel the cause.

The statement reads in part, “We have received the news of the unfortunate incident of the toppling of a part of one of the shades at Ekeaja market and the death of three persons in the incident with rude shock.

“As mortals, we can not question God but we pray fervently for God Almighty to grant the victims rest in his bosom and comfort their families.”

Governor Umahi while appealing to families of the deceased to uphold the outcome as the will of God, prayed for the quick recovery of those who sustained injuries during the collapse.

“We, however, pray that God Almighty grants the hospitalized survivors quick recovery and reintegration with their families.”

However, governor Umahi directed the Police and other relevant agencies to immediately launch a full-scale investigation to unearth the immediate and remote causes of the incident.

“I, therefore, implore our Security Agencies to work with the Engineers at the Ministry of Works and the contractor of the project to immediately mobilize for a thorough investigation into this unfortunate incident to discover the causes of the ugly occurrence as a way of averting reoccurrence.”