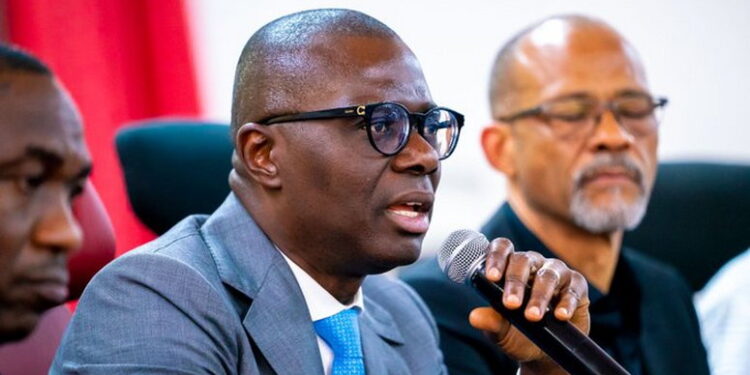 Mr Babajide Olusola Sanwo-Olu, Lagos State Governor, has assured that his administration would continue to collaborate with stakeholders, especially experts and professional bodies in the built industry to ensure that due processes and procedures are followed in the construction of buildings in the State.
He stated this at the Opening of the 2021 Conference and 34th Annual General Meeting of the Nigerian Institution of Structural Engineers (NIStructE).
The AGM tagged: “Eko Ile 2021 with the theme: “Digital Technology and its Impact on Structural Engineering Practice in Nigeria” held at Sheraton Hotel, Ikeja, Lagos.
Sanwo-Olu, who was represented by Dr. Kadri Obafemi, his Deputy added that government will rely on them to strengthen the regulatory regime that will guarantee that due process is followed in the built industry.
Sanwo-Olu added that the recurring issue of building collapse is an indication of the urgent need to take a holistic view of the entire process of building construction including the competence and professional conducts of those involved in construction as well as the effectiveness of regulatory framework so as to ensure that appropriate measures are taken to avert future occurrence of collapse.
Commenting on the theme of the conference, the Governor described it as apt as it speaks to the need for structural engineers to embrace technology and digitization as necessary tool to enhance professionalism and better outcome in construction processes.
Besides, the governor added that the gathering will provide an opportunity for participants to share thoughts, exchange views and forge a common front in addressing some of the critical issues in built sector.
In his presentation on the theme of the Conference, the Guest Speaker and immediate past president of the Nigerian Institution of Structural Engineers, Engr. Eddy Atumonyogo stressed the need to harness and implement digital technology in Structural Engineering Practice and highlighted the impact of technology.
He said, structural Engineers should embrace technology, collaborate with others, adjust to accommodate digitally young leaders and guide them to acquire the digital knowledge.
He said they need to do this to safe their profession.
He noted that there are various applications and softwares that could aid their works and urged members to learn how to apply them in the discharge of their duties.
While commending the Lagos State Government on the digitalization of its operations, Engr. Atumonyogo further charged the Government to do more in making information more accessible on the website for everyone to ease the business of structural engineering.
In his speech, Chairman of the Occasion/President of the Nigerian Society of Engineers (NSE), Engr. Babagana Mohammed urged the engineers to be actively engaged in politics and governance so as to bring their professional competencies to bear on the process of governance.
Commenting on the issue of building collapse, the NSE President commended the Nigerian Institution of Structural Engineers for following the dictates of professionalism by ensuring that due process was followed in contributing to the investigations going on over building collapse at Gerard Road, Ikoyi.
He asserted that the use of qualified engineers will impact on the quality of projects being undertaken, adding that the society will greatly benefit from the wealth of knowledge and experience of Nigerian engineers.
The President insisted that there was a need for Nigerian Government to patronize local engineering firms in the area of maintenance and capacity building if the nation will reach its full potentials as was the case of the United Arab Emirate.
Also in his welcome address, President of the Nigerian Institution of Structural Engineers, Engr. Kehinde Osifala disclosed that the theme of the conference was carefully chosen to be future compliant and educate its members and stakeholders about the capabilities of technology and how it relates to Structural Engineering.
While bemoaning the spate of building collapsed in the country and especially in Lagos, Osifala said the Institution is ready to partner and collaborate with stakeholders to bring about a reduction in the incidence of structural and building collapse in the country especially Lagos.
He said that the Institution has submitted its preliminary report on the recent collapse at Gerrard Road, Ikoyi to Council for Regulation of Engineering in Nigeria (COREN) and a Memorandum to the Lagos State Panel of Enquiry on the collapse.