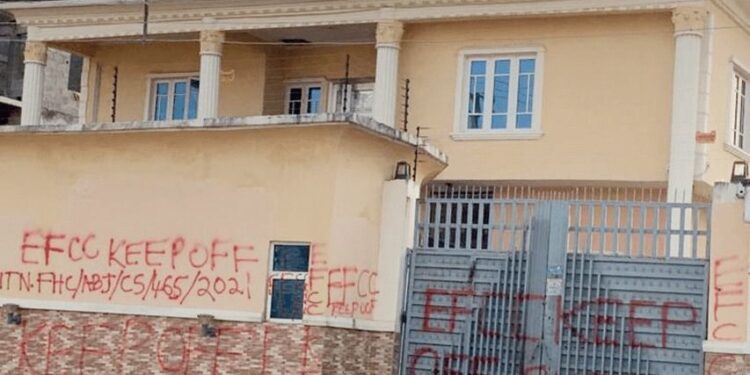 Residents of Magodo, a Lagos suburb, and the Adeyiga family have reignited their hostilities as the gate leading into Shangisha Estate, off CMD Road, was locked as at 4. am on Wednesday.
Nobody could either come in or go out. Commercial activities have been paralysed as members of the Adeyiga family, armed with a Supreme Court judgment, have asked the house owners to vacate the land.
Residents complained that the family has threatened to pull down the houses with bulldozers.
Being a Lagos State acquired land, the landlords claimed that they have Certificates of Occupancy (C of O) from the government.
On Tuesday night when the crisis broke out, following the insistence of the family to retrieve its vast lands, it took the chairman of Ikosi Isheri Council to restore order.
There was pandemonium as residents resisted the attempt to eject them.

The move by the owners of the disputed Magodo- Shangisha Estate created palpable tension in Magodo Estate as many houses are under threat of demolition and possession as a combined team of policemen stormed the area on Wednesday to write possession taken on many of them.
The buildings were marked by stern-looking policemen from the Force Headquarters, Abuja, who were there to enforce a court judgment over the land tussle in the estate.

It was learnt that the execution order was given after a Supreme Court judgment which mandated the Lagos State government to give back five hundred and forty-nine thousand (549,000) plots of land to the original owners of the lands before it was illegally acquired over 38 years ago.
Chief Adebayo Adeyiga, who spoke to journalists on behalf of other landlords, said in 1985, the Military Administrator of Lagos State, approached him and others that they wanted to build a national hospital on the land, but to their surprise, the land was shared among themselves and the civil servants.
Chief Adeyiga said they were cajoled by the then Military Administrator of Lagos State and to their surprise majority of the houses were demolished, they then wrote to the Military Administrator to know why their houses were demolished.

But after much pressure, they said they wanted to build an International hospital on the land. He said: “To my surprise and others the whole area was given to influential people and some top civil servants then, after seeing what the government was doing we then went to court to challenge them. We got an interlocutory against the government and those that acquired the lands.
“In 1993 the judge then ordered that five hundred and forty-nine thousand plots of land should be given to the original owners of the land, but we were more than that.

The order was that the land should be given to us even if the Lagos State government went to appeal the judgment but all to no avail
“The judge then was mad at Lagos State government to the extent of revoking their certificate of occupancy already given to them and instructed the state government not to issue another document on the land.”
He added that when they got to the Court of Appeal the court supported the earlier judgment, but the state insisted on going to court.

The Supreme Court then decided the case in 2012 in their favour, “at this point we are open to negotiation from the affected landlords, but every building in the estate was marked for possession taken by court.”
It was gathered that when the Lagos State government was not satisfied with the high court judgment they approached the appeal court which affirmed the judgment of the lower court on the matter and ordered that Lagos State should as a matter of first priority give back 549,000 plots of land to the original landowners in the Association of Shangisha landlords.