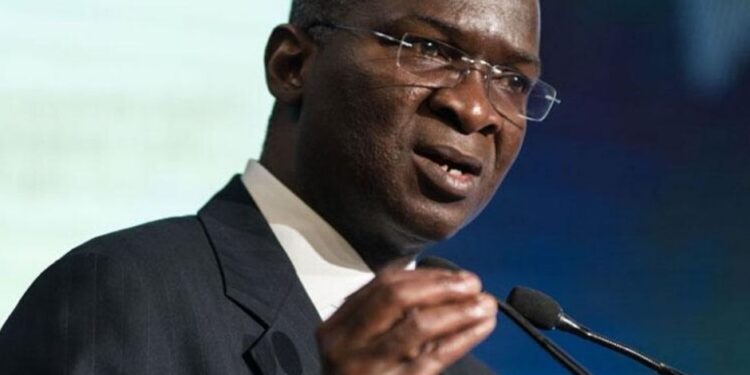 Share on FacebookShare on TwitterShare on WhatsappShare on Telegram
The Minister of Works and Housing, Mr Raji Fashola (SAN), has appealed to individual private landlords for a downward review of the number of years demanded on their property.
Fashola appealed in Ibadan, Oyo State on Thursday during an inspection tour of the Federal Government Housing project, situated on the Ibadan-Oyo Expressway.
Fashola advocated that a reduction in the number of annual rents demanded by landlords would lessen pressure on new tenants.
He said, “We believe that if individuals and private landlords can review downward the number of years demanded on rent, the pressure of looking for two or three years rent by the tenants will reduce.
“That is one of our appeals to National Council on Lands, Housing and Urban Development as they are meeting in Jos.
“I am appealing to them that they should go to their various State Assemblies after the meeting and pass legislation that will reduce the number of years landlords demand as rent from tenants.
“I believe if this can be done, the pressure on tenants will be minimized, ” Fashola advocated.
Besides, he said the Federal Government was committed and passionate about solving the housing deficit in the country.
He said that the Federal Government was determined to do something more in the area of housing.
The Minister noted that many could no longer meet up with the payment of their house rent and constantly facing eviction threat by landlords.
Speaking on the level of work done on the 72 units housing project, Fashola, who expressed satisfaction assured that the project would be completed as scheduled.
The Minister, who seized the opportunity of the visit to chair the memorial lecture in honour of late Sherifat Kola-Daisi, the wife of Chief Kola Daisi, Founder of Kola-Daisi University, Ibadan paid tribute to the deceased.
He described late Mrs. Kola Daisi as a bridge-builder, a generous and a prayerful woman.
The former Chairman, First Bank of Nigeria Plc, Mrs Ibukun Awosika, delivered the memorial lecture, titled:  “Life, Faith and Society’’.
The Federal Controller of Works in Oyo State, Mr Kayode Ibrahim, and other management staff of the Works and Housing Ministry were among the minister’s entourage.

Ogun State Government clamp down on over 32 unapproved buildings