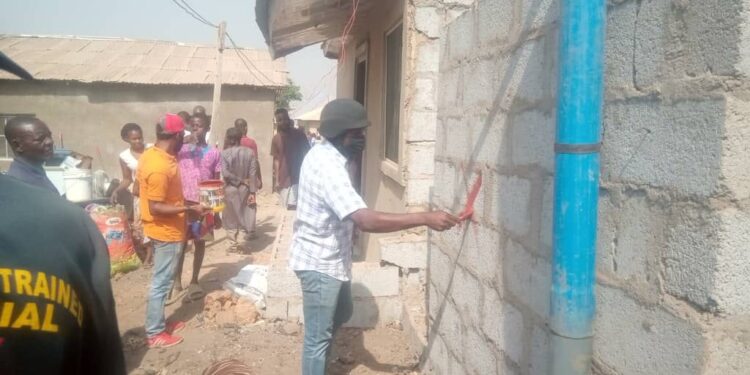 As part of moves to restore the Abuja master plan and combat environmental nuisances, the Federal Capital Territory Administration (FCTA) on Monday demolished hundreds of shanties previously used for residential and commercial purposes, primarily by scavengers, dealers, and squatters.
The Illegal buildings and scrap materials are strewn across a major road network around Angwan Berberi, off Efab Estate, and behind Kado Fish Market, near Life camp axis in Abuja’s Gwarinpa District, were particularly hard hit.

Illegal settlers’ residences erected with sacks inside an undeveloped land next to the Redeemed Christian Church of God, Efab Road, by Adebowale Gas Station, in the vicinity were also demolished.
FCTA officers that moves to site with bulldozers conducted the exercise with the help of its Security Command and Control Centre with over two hundred joint security personnel and field officers drawing from Development Control Department, Abuja Environmental Protection Board (AEPB) and other relevant agencies.

Speaking on the exercise, Comrade Ikharo Attah, the Senior Special Assistant on Monitoring, Inspection and Enforcement to the FCT Minister, said the action followed a complaint sent to the FCT Administration through Command and Control Centre, due to the high level of proliferation of shanties, scavengers (aka Baba-Bolas) and others in the area.
He said the FCTA discovered a very worrisome development on the road, which is the Cadastral C02 road corridor here in Gwarinpa, which people started building houses on it.

According to him; “We cleared all the shanties and we have marked the houses and warned people to be aware of two areas they must not build on- road corridors and waterways.

“We have given them enough time to move, some of them we have removed before, and they returned. So we keep giving enough time over and over again, and the question is we have given you enough time, but have you given the government enough time before coming to put illegalities?
“Most of the FCDA road corridors are transit ways not yet constructed, but people have already built on them.

“It is very worrisome when you see a beautiful road corridor that is yet to be constructed, and people are building on it, it is very disturbing. But our appeal is to residents not to allow people come and build kiosks and anything on the road within their neighbourhoods,” he stressed.

Meanwhile, one of the owners of the houses in the area, who claimed to be Barrister, but pleaded anonymity, disclosed that she had bought the land for which she spent not less than three million to develop, the structure.

She expressed shock over the development, as she and she had planned to move into the newly finished house today, only to meet their house marked for demolition.
Besides, a resident, who simply identified himself as Mr Samson, whose place of residence was demolished, however, admitted that most people were aware that the area has been reserved for a major road, linking many parts of the nation’s capital city.