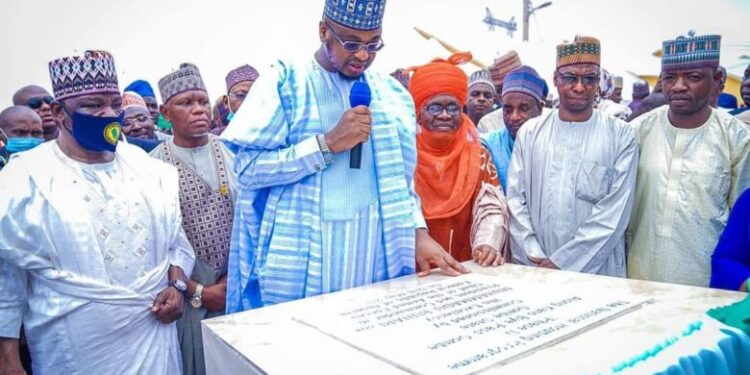 The Housing Estate which is located at Western Bye-Pass, Gombe, Gombe State, was built under the National Housing Programme (NHP).

The estate comprises 48 units of 2 bedrooms, 24units of 3 bedrooms and 4 units of 1bedroon bungalows.

Infrastructure at the housing estate includes “well laid out internal roads and drainages, a central borehole with overhead tanks to guarantee a constant supply of water for the residents and provision of electricity.

President Buhari who was represented by the Minister of Communications and Digital Economy, Dr. Isa Ali Ibrahim said the completion and commissioning of the Housing Estate were in line with his promises during his presidential campaigns.

Mr. Stephen Kilebi, Deputy Director of Press and Public Relations Unit in a statement stated that President Buhari also revealed that his administration has been able to redeem the unfulfilled promises made by past administrations 28 years ago to provide houses for each member of the Super Eagles who performed gallantly at the African Cup of Nations in 1994, adding that the fulfilment was better late than never.

The President added that Super Eagles were given the privilege to indicate where each would want the house to be built, while some wanted it in their villages, the others wanted it where they lived and he has approved that the allocation should be made based on their choices of location, noting that even the deceased among them were not left out in the allocation.

He commended Gombe State Government for allocating the land to the Federal Government gratis to enable his administration to provide affordable housing units for Nigerians.

Speaking earlier, the Governor of Gombe State, Muhammed Inuwa Yahaya represented by the Deputy Governor, Dr. Manasseh Jato, commended the Federal Government for providing houses to the residents of Gombe State to cushion the effect of its overstretched houses.

He said that Gombe State is a peaceful state that has attracted influx of foreigners and has overstretched available housing facilities.

In his remark at the event, Minister of Works and Housing, Mr. Babatunde Fashola, SAN, was represented by the Zonal Director, National Housing Programme, North-East Federal Ministry of Works and Housing, Arc. Usman Bashir said that said a similar project was replicated in 34 states of the federation in line with the administration’s pledge to ensure adequate housing for Nigerians.

Explaining how the citizens can access the houses, the Minister said, ” We have offered all these housing units to members of the general public in a non-discriminatory way by opening the National Housing Portal at Https://nhp.worksandhousing.gov.ng to ensure that those interested are not inhibited by any artificial obstacles and allocations will be made based on those who apply and pay on a first-come, first-served basis.”

Earlier, the Permanent Secretary, Federal Ministry of Works and Housing, Mr. Bashir Nura Alkali, who was represented by the Deputy Director, Planning, Research and Statistics, Dr. Dunoma Ahmed, said that it was a programme rolled out by the government of President Buhari to provide acceptable and affordable housing for Nigerians as well as address the housing deficit bedeviling the nation.

His Royal Highness, the Emir of Gombe, Alhaji Abubakar Shehu Abubakar, represented by Alhaji Hakeem Jaro Mohammed, commended the Federal Government for proving houses for the people of Gombe State through the National Housing Programme.

Attesting to how the project has impacted positively on the lives of the masses in the state, a painter at the site, Mr. Musa Umar, said that the project has helped him and other artisans who worked on the project financially. He added that with the money realized they were able to support their families. He commended the government of President Buhari and requested that more projects should be brought to Gombe State so that their citizens can benefit as well as feel the federal government’s impact.

In addition, a carpenter, Mr.Lazarus Musa, also commended the Federal Government for embarking on such an enormous project in the state, adding that he had fifteen workers under him with whom he rendered carpentry jobs on the site and paid from the money he got from the contract.