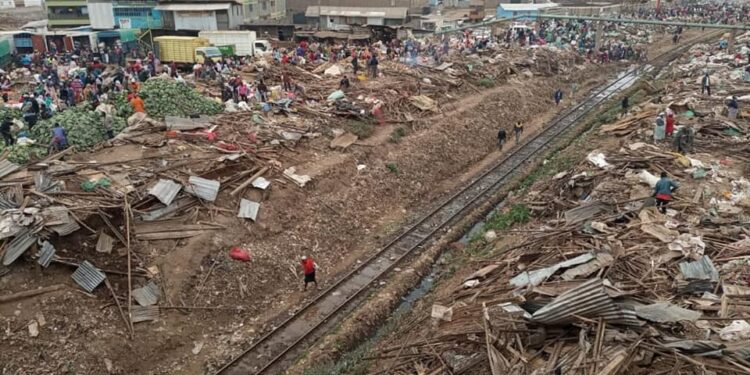 A committee comprising officials of the Federal and Ogun State Governments has been set up, to engender a developmental plan for the Lagos/Ibadan railway corridors to forestall illegal activities, which may become a future threat to commuters and rail services.
Commissioner for Physical Planning and Urban Development, Tpl. Tunji Odunlami disclosed this while speaking at a meeting with officials of Nigerian Railway Corporation (NRC) and inauguration of the Committee in Lagos.
Odunlami said the move was in anticipation of the tendency for people to build slums or shanties along the corridors of rail stations located within the State.
Tpl. Odunlami said 5 out of 10 Train terminuses along Lagos/Ibadan railway stations were domiciled in Ogun State, adding that there was a need for the State to take a proactive step towards preventing illegal development of structures.
“The train station is more viable for business and investment opportunities mostly for Real Estate Developers, that is why we need to have a proper plan for the rail stations so that we can ensure development around these corridors which the Federal and State Government will be proud of in future,” he said.
The Commissioner solicited the cooperation of NRC to avert haphazard development along the passageways to avoid vandalisation of public assets.
Contributing, his counterpart in Transportation, Engr. Gbenga Dairo said the official operation of the rail system had impacted greatly on the socio-economic activities of the State and assured of government’s support for the project to benefit the general public.
On his part, the Director Operations, NRC, Mr. Niyi Alli, said the Corporation would ensure that necessary arrangements were in place for the smooth running of rail stations, pledging the Federal Government’s readiness to assist the State in actualising its dream.
Members of the Committee comprised of Permanent Secretary, Ministry of Environment, Engr. Rasaki Ojetola, representatives of the Ministry of Transportation, Engr. Olawale Shokunbi, Ministry of Physical Planning and Urban Development, Tpl. Sola Odukoya, NRC, Engr. Wahaab Amodu and Engr. Samsideen Balogun of the Federal Ministry of Transportation (FMoT).

What will the 2022 housing market look like? It could ‘come back down to sanity