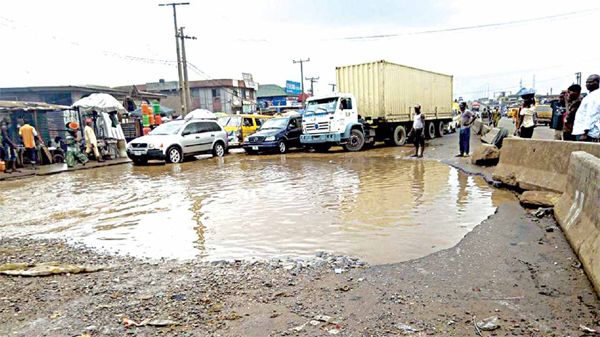 The Federal and Ogun State Governments have concluded plans to kick start palliative work on the deplorable 64-kilometre Ota-Idiroko Road in Ogun state.

According to the Federal Controller of Works in Ogun State, Mr Umar Bakare who led engineers from both sides to inspect the highway on Thursday, the Federal Government was concerned about the plight of road users and was committed to speedy reconstruction of the road.

He disclosed that the contract for the reconstruction of the highway was undergoing procurement process under the Tax Credit Scheme of the Federal Government, adding that while the processing of the contract is ongoing, there is a synergy between the Federal Ministry of Works and Ogun State Government to put this road in a motorable state.

He said consultations had reached an advanced stage on both rehabilitation and reconstruction of the road, assuring road users that the government was concerned about their plight.

Speaking on behalf of the Ogun State Government, the Permanent Secretary, Ministry of Works and Infrastructure, Mr Lateef Yusuf, said the maintenance work would begin within two weeks.

In August, angry residents took to the roads to protest against the government and the disheartening condition of the roads which leads to to most industrial part of the state.

From Joju road on the Lagos-Abeokuta Expressway through Sango-Idiroko road, Oju-ore, Lafenwa, Itele, Sango-Ijoko, Bible College road, Temidire, Dalemo to Sango Park, among others, the roads are in horrible state of disrepair.
Currently, the most terrible spots along the expressway are Joju Junction; the stretch towards Conoil Junction; the bridge edge, Sango Park and the Bible college side, which stretch to the tollgate.