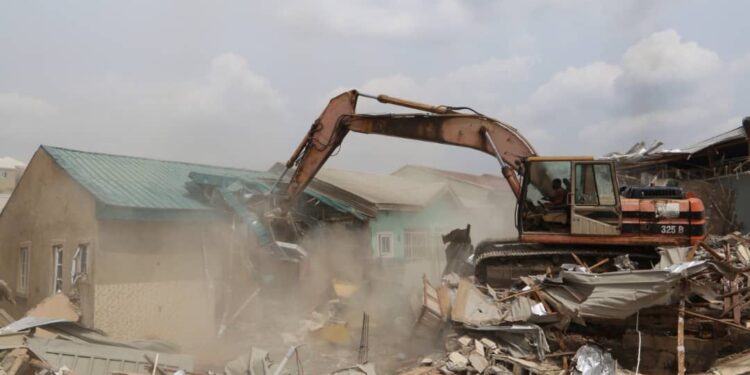 The Federal Capital Territory Administration (FCTA) has begun the removal of more than 400 illegal Structures and houses in Gwarinpa, Abuja.

The Development Control and FCT Tasks team on City Sanitation stormed the area and demolished over 400 illegal structures illegally reconstructed from corner shops to residential buildings and others that obstruct waterways.

Tlp. Mukhtar Galadima, Director, Department of Development Control, in a chat with journalists during the exercise, expressed disaffection at the poor hygiene and sanitation of the area, saying waste is being dumped directly into the waterways.

“We are working with the Federal Housing Authority and have had some discussions with them to convert it into a modern mall. The corner shops are not used for the purpose they were built to serve. Instead, they have been converted and used as residential buildings. When you look at the number of people staying here, the hygiene and sanitation are zero. Thus, it is better to remove them for safety reasons “.

While speaking on notice of demolition, he said they were given 1 month’s notice,
“We gave them over a month’s notice, I remember we came here for sensitization and we marked it. When you go round you see the markings on the wall”.

“What we are trying to do is to recover the flood plain within Gwarinpa where the people built on the waterway. The area is not properly planned because they are just discharging their waste directly into the stream. This could be a source of the epidemy, so it is a time bomb waiting to happen. If we don’t take action immediately the consequences are unimaginable.

“They even pushed the stream to a point that if there is heavy rain, there will be massive flooding and this is a disaster waiting to happen. Very sad here, the FCTA through Federal Capital Territory, Emergency Management Agency, FEMA and other components agencies had given a warning, the Federal Government had given warning through the water resources, NIMET also warned against impending flooding. But people decided to build on the flood plain and they are arguing about 15 meters but they built zero meters some are on minus 3 meters and thereby constricting the waterway. So, when a disaster occurs they will say Government is not serious.”

Speaking on the number of houses that would be removed, he said work is still ongoing, adding that all houses on the water plain will be affected.
“We are enumerating and we don’t know the number that will be affected yet. The Development Control is showing commitment to saving lives so that flooding would not happen in Gwarinpa.

He, however, lamented, “Not even one soakaway in the whole community, once they defecate and urinate everything comes straight to the stream, they cannot dig soak away because it is a water bed. Once anyone defecates in his house it comes to the stream and that is an epidemic and disaster that is waiting to happen. We are also trying to prevent flooding so that when the rain comes, it will have a wilder flood plain to pass through”.