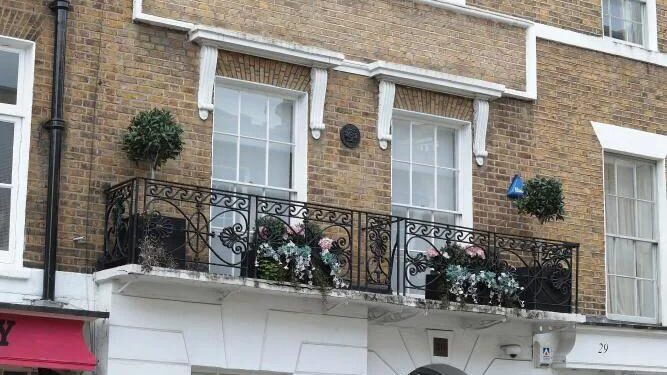 Tony and Cherie Blair saved hundreds of thousands of pounds in property taxes when acquiring a London office building from an offshore company partially owned by a prominent Bahraini minister.
uk.yahoo.com in a report by The Guardian said that the former British prime minister and his wife became the owners of a £6.5m office building in 2017 by acquiring a British Virgin Islands (BVI) company controlled by the family of HE Zayed bin Rashid Alzayani, the constitutional monarchy’s current minister for industry, commerce and tourism.
The deal is revealed in the Pandora papers, a trove of leaked offshore documents. They reveal Alzayani as the secret shareholder of another offshore firm that has spent more than £60m buying UK commercial property over the past nine years, including the Marylebone address sold to the Blairs.
The Pandora papers are the largest trove of leaked data exposing tax haven secrecy in history. They provide a rare window into the hidden world of offshore finance, casting light on the financial secrets of some of the world’s richest people. The files were leaked to the International Consortium of Investigative Journalists (ICIJ), which shared access with the Guardian, BBC and other media outlets around the world. In total, the trove consists of 11.9m files leaked from a total of 14 offshore service providers, totalling 2.94 terabytes of information. That makes it larger in volume than both the Panama papers (2016) and Paradise papers (2017), two previous offshore leaks.

Where did the Pandora documents from come?
The ICIJ, a Washington DC-based journalism nonprofit, is not identifying the source of the leaked documents. To facilitate a global investigation, the ICIJ gave remote access to the documents to journalists in 117 countries, including reporters at the Washington Post, Le Monde, El País, Süddeutsche Zeitung, PBS Frontline and the Australian Broadcasting Corporation. In the UK, the investigation has been led by the Guardian and BBC Panorama.
What is an offshore service provider?
The 14 offshore service providers in the leak provide corporate services to individuals or companies seeking to do business offshore. Their clients are typically seeking to discreetly set up companies or trusts in lightly regulated tax havens such as the British Virgin Islands (BVI), Panama, the Cook Islands and the US state of South Dakota. Companies registered offshore can be used to hold assets such as property, aircraft, yachts and investments in stocks and shares. By holding those assets in an offshore company, it is possible to hide from the rest of the world the identity of the person they belong to, or the “beneficial owner”.
Why do people move money offshore?
Usually for reasons of tax, secrecy or regulation. Offshore jurisdictions tend to have no income or corporation taxes, which makes them potentially attractive to wealthy individuals and companies who don’t want to pay taxes in their home countries. Although morally questionable, this kind of tax avoidance can be legal. Offshore jurisdictions also tend to be highly secretive and publish little or no information about the companies or trusts incorporated there. This can make them useful to criminals, such as tax evaders or money launderers, who need to hide money from tax or law enforcement authorities. It is also true that people in corrupt or unstable countries may use offshore providers to put their assets beyond the reach of repressive governments or criminal adversaries who may try to seize them or to seek to circumvent hard currency restrictions. Others may go offshore for reasons of inheritance or estate planning.
Has everyone named in the Pandora papers done something wrong?
No. Moving money offshore is not in or of itself illegal, and there are legitimate reasons why some people do it. Not everyone named in the Pandora papers is suspected of wrongdoing. Those who are may stand accused of a wide range of misbehaviour: from the morally questionable through to the potentially criminal. The Guardian is only publishing stories based on leaked documents after considering the public interest. That is a broad concept that may include furthering transparency by revealing the secret offshore owners of UK property, even where those owners have done nothing wrong. Other articles might illuminate issues of important public debate, raise moral questions, shed light on how the offshore industry operates, or help inform voters about politicians or donors in the interests of democratic accountability.
The tax saving was made because the Blairs acquired the property’s holding company – not the building directly – meaning they did not have to pay about £312,000 in stamp duty.
While there was nothing illegal about the transaction, and there is no evidence the Blairs proactively sought to avoid stamp duty, the deal highlights a loophole that has enabled wealthy property owners not to pay a tax that is commonplace for many ordinary property buyers in the UK.
Robert Palmer, the executive director of Tax Justice UK, said: “It is unfair that if you buy a company that owns a property then you don’t have to pay stamp duty. These are loopholes that are available to wealthy people but not available to others. Politicians need to fix the tax system so that everyone pays their fair share.”
Stamp duty is paid by buyers of commercial and residential properties selling at values above £150,000 and £125,000, respectively.
The average price of a house in the UK was £244,229 in July, according to the building society Nationwide.

The property, 30 Harcourt Street, is just to the north of Mayfair in central London. Photograph: Martin Godwin/The Guardian
Four years ago, the Blairs acquired 30 Harcourt Street, a former townhouse just to the north of Mayfair in central London, with Cherie Blair moving her government advisory firm, Omnia Strategy, into the four-floor building.
There was no secrecy at the time about the transaction, which was reported by the press. However, the identity of the seller – and the structure of the transaction that meant stamp duty was not due – were not known, and can only be revealed courtesy of files in the Pandora papers.
Four months before the purchase, the Blairs formed a UK company called Harcourt Ventures, in which they both held a 50% stake and which was registered for VAT. Their new company then acquired the shares in Romanstone, the Alzayani family business that owned 30 Harcourt Street, which was a wholly-owned subsidiary of their property group Riverton Capital.
The Blairs then dissolved Romanstone inside Harcourt Ventures, leaving 30 Harcourt Street directly owned by their firm. Cherie Blair told the Guardian there was “nothing unusual or underhand in any of this” and that she did not know the identity of the sellers before entering into the transaction.
The Alzayanis did not want to sell the building separately from their BVI company, she said and added: “I did not want to be the owner of a BVI company and so instructed my accountants, BDO, and solicitors, Blake Morgan, to ensure that I could repatriate the company and the building to the UK.
“All the arrangements were made for the express purpose of bringing the company and the building back into the UK tax and regulatory regime, where it has remained ever since. All taxes have been paid ever since and all accounts are openly filed under the law.”
Had Harcourt Ventures acquired the building directly, the Blairs would have faced a stamp duty bill of about £312,000.
Richard Kleiner, managing partner of the City accounting firm Gerald Edelman, said: “If the Blairs’ company Harcourt Ventures had directly acquired the property then stamp duty land tax of up to 5% would have been payable on the purchase. However, they acquired the shares in the BVI company that owned the property, which would not have attracted any stamp duty.”

While they saved money when they purchased the property, the Guardian understands it is possible the structure could leave the Blairs with a higher tax bill in the future, but only if they decide to sell the building.
Lawyers for Riverton Capital said: “Before 6 April 2019 non-residents disposing of interests in commercial properties were not liable to pay capital gains tax. Many companies, families and investors used this type of lawful structure after obtaining professional advice, which is the case here.
“The companies have complied with all UK laws past and present. The minister referred to in the email is one of several beneficiaries of the companies.”