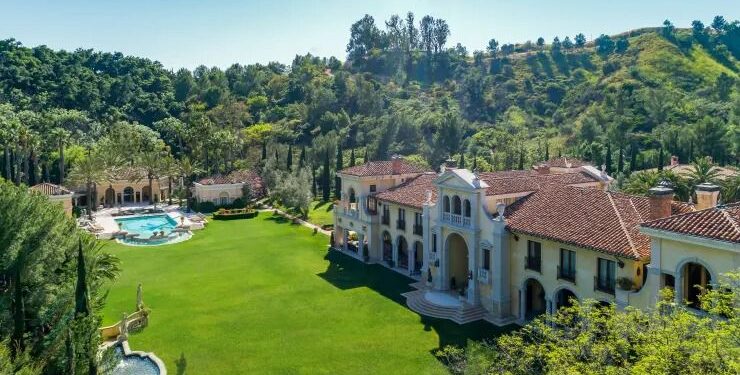 When high-priced mega-mansions for sale languish on the market; sprawling, flashy and unable to attract a buyer, some owners turn to a double-edged option: a real estate auction.
The auction block can move trophy properties with nosebleed-worthy price tags quickly, after years of idling. But it comes with a harsh reality.
An auction can act as a metaphorical real-estate guillotine, slicing inflated asking prices in half or worse, according to a CNBC review of recent sales.
CNBC reports that the three highest-priced homes to ever sell at auction each came up for sale in the past 14 months. And while each transaction carried an eye-popping final bid, the three mansions saw their original asking prices slashed by 70% on average leaving a combined $600 million on the table.
It’s an unfortunate fate that could plague a dermatologist-turned-developer and his home’s upcoming date with the auctioneer.
Dr. Alex Khadavi, a celebrity skin doctor in Los Angeles, was hoping for a quick sale and big payday when he finally completed a 21,000-square-foot mansion that took seven years and tens of millions of dollars to develop.
But a little over a year since he listed it for sale — with a price tag featuring a string of lucky 7s at $87,777,777 — the doctor’s dreams of cashing out are being crushed by a mountain of debt, unpaid contractor bills, bankruptcy court proceedings and trouble with the law.
Now he’s running low on luck, money and time.
Khadavi, who filed for Chapter 11 bankruptcy protection about two weeks after putting the home on the market, hasn’t lost his sense of humor, though.
“The home is sandwiched between billionaires, and I’m the poorest guy on the block,” he told CNBC with a laugh.
Khadavi admitted he got in over his head developing the luxury residence which includes seven bedrooms, 11 baths, and over-the-top features like a glass-encased industrial elevator, a giant car gallery, a stealth DJ booth that rises out of the marble floor powered by subterranean hydraulics, and a high-tech audio-visual system for projecting an NFT collection inside and outside the home.
“It kind of became a passion and obsession, and it cost more money than I thought,” Khadavi said.

Public records show Khadavi paid $16 million in 2013 for the lot at 777 Sarbonne Road, which included an existing home he later demolished. Then came a string of seven-figure financing deals, including a sizeable loan in 2020 for $27 million.
Those nine years also brought a storm of financial trouble around the property including default notices, a government lien, the looming threat of trustee sales, and two mechanic’s liens filed by contractors who claimed they were never paid for their services.
On top of it all, last year Khadavi was arrested after he was allegedly caught on a surveillance camera in the lobby of his apartment building residence using homophobic slurs and threatening to kill his neighbours who are a married gay couple. Khadavi plead not guilty and told CNBC he had no comment on the pending case.
Despite all his legal troubles, Khadavi managed to finish the home but said he never imagined he’d have to carry the cost for more than a year while waiting for a buyer who would never materialize. With few options left, he’s surrendered to the fact that his home’s value will soon be determined at auction.
“I can’t carry the cost. I had to do what I had to do,” he said.

Hoping for a quick sale, Khadavi together with the home’s co-listing agents, Aaron Kirman of Compass and Mauricio Umansky of The Agency, decided to auction the house.

“He had a very tight timeline. And he was willing to give up a level of control … and let the market determine the price in a very tight, elevated moment,” Kirman told CNBC.

The sale will be handled by Concierge Auctions, the leading luxury home auctioneer, and includes a reserve set at $50 million, meaning Khadavi won’t entertain offers below that number. The bidding is set to start on April 27, and the auction will unfold over five days — the standard duration for most of the company’s home sales.
“It’s a very short timeframe, which could either be good or bad,” said Kirman, who recently partnered with Concierge Auctions on the auction of 944 Airole Way, a mega-mansion that sold for a record $141 million.
Khadavi hopes that a big sale will bode well for his upcoming auction. While he believes the view alone from 777 Sarbonne is worth his $87.78 million asking price, he admitted he’d be happy with millions less.
“My magic number is $77 million,” Khadavi told CNBC. (His favourite number is 7.). I’d like it to be that, it would be amazing.”