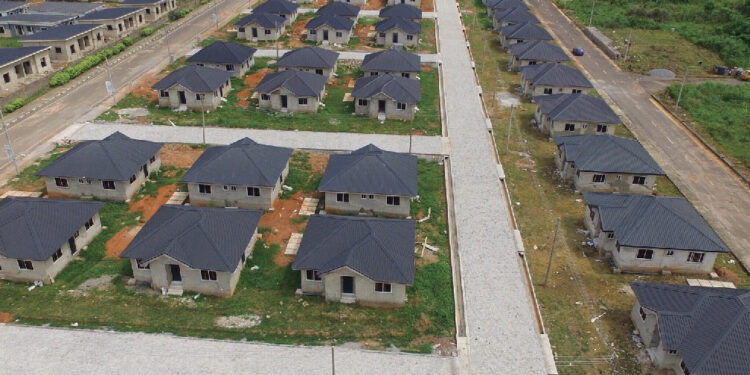 Share on FacebookShare on TwitterShare on WhatsappShare on Telegram
ADVERTISEMENT
Ogun State Commissioner for Housing, Jagunmolu Akande Omoniyi on Monday, disclosed that the government will complete and allocate five of its abandoned housing estates.
The affected estates are located in Ayetoro, Ikenne, Ago- Iwoye, Ijebu-Igbo and Ota.
The estates, that were built several years ago but abandoned will now witness a facelift and allocated to ease housing deficit in the state.
Omoniyi, who disclosed during a chat with the press in Abeokuta, the state capital explained that the estates built by previous administrations but we’re not allocated for occupation.
He said, “This ministry has decided to renovate the existing housing estates built by the previous administrations, which are yet to be occupied by people, and we are willing to give it a new look, so that residents who have signified interest in occupying the estates can do so.”
According to him, besides the provision of decent homes to people of the state, the Prince Dapo Abiodun led-administration is equally creating employment through the engagement of artisans.
Omoniyi disclosed further that “About 5,000 artisans have been engaged for the various categories of housing projects currently going on in Ogun.”
On the 10,000 housing units targeted by the Federal Government, the commissioner disclosed that Ogun State government would tap into the mortgage options provided by the Gateway Mortgage Bank to successfully deliver the scheme.