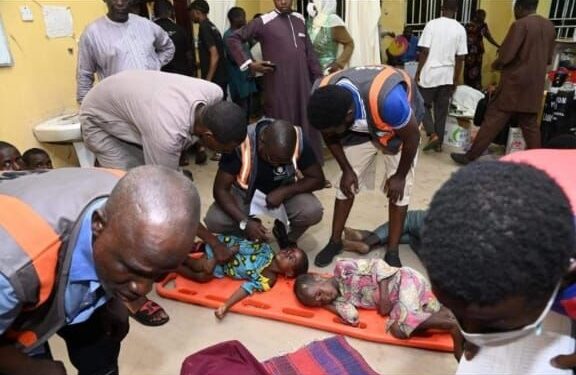 Several houses built of mud were on Monday destroyed in Damaturu, the Yobe State capital following a heavy downpour of rainfall and accompanying thunderstorm.

The report said no fewer than 41 persons sustained various degrees of injuries admitted to the Specialist Hospital, Damaturu Yobe State.

He told journalists that “SEMA responded to victims of Building collapse due to heavy windstorm and rainfall”.

“Search and rescue team of Yobe State Emergency Management Agency SEMA on 9th May 2022 responded to a distress call by good samaritans and supported the evacuation of victims to Yobe State Specialist Hospital”.

He added that unfortunately 5 died comprising 2 boys, 1 adult woman, 2 girls”.
Goje added that all victims are receiving treatment free and already 23 were discharged from the Hospital.

Checks revealed that the thunderstorm affected many electricity poles that fell on houses many of which were built with mud.

However, Governor of Yobe State Mai Mala Buni, has commiserated with the families of five persons who died from building collapse following heavy rainstorm in Damaturu yesterday.

Governor Buni who spoke through the Director-General, Press and Media Affairs, Mamman Mohammed described the incident as unfortunate.

“It is very sad loosing the victims in this very unfortunate natural disaster but that is the decreed time by the Almighty.

“We pray to Allah (SWT) to forgive their shortcomings and to grant their families the fortitude to bear the loss” Governor Buni prayed.

The Governor directed the State Emergency Management Agency (SEMA) to ensure treatment of those who sustained various degrees of injuries and to provide the victims with emergency relief materials to cushion their hardships.