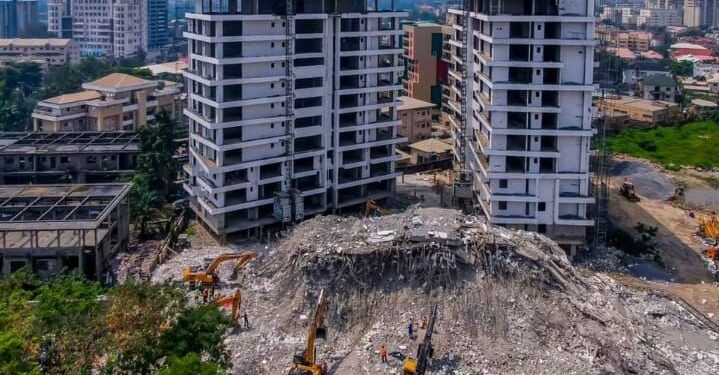 The Lagos State government has said it would commence deconstruction of the three uncompleted high-rise structures on the site of a 21-storey building that collapsed on Gerrard Road, Ikoyi, last November.

The government, on Thursday, explained that the structures have failed integrity tests, prompting it to embark on a controlled deconstruction to bring them down.

Recall that no fewer than 45 persons, who were mainly construction workers and vendors, died in the incident. Also, the developer, Mr Femi Osibona, died in the collapsed building.

The government announced the name of a structural engineering firm, Edge of Design, that will dismantle the twin 14-storey and eight-storey structures on the site in a manner that will not pose any health or environmental hazards to residents in the neighbourhood.

The deconstruction, which is expected to be completed within 90 days, is to be supervised by relevant agencies of the Government and private stakeholders in the built industry.

In the context of physical construction, deconstruction is the selective dismantlement of building components, specifically for reuse, repurposing, recycling, and waste management.

Wikipedia explains that deconstruction differs from demolition where a site is cleared of its building by the most expedient means. Deconstruction has also been defined as “construction in reverse”. Deconstruction requires a substantially higher degree of hands-on labour than does traditional demolition, but as such provides a viable platform for unskilled or unemployed workers to receive job skills training.

1] The process of dismantling structures is an ancient activity that has been revived by the growing fields of sustainable and green building.

The deconstruction development formed part of the recommendations by a six-man panel that investigated the collapse of the 21-storey structure owned by Messrs Fourscore Heights.

The land on which the failed structures sit has been forfeited to the State Government by law. The panel also recommended criminal prosecution of the developer for contravening the State’s building codes.

Olujimi Lewu, a representative of Edge of Design, explained the step-by-step process to be employed in bringing down the structures, and that the work would be done without any injury or fatality. He illustrated how the slabs would be removed until the structures come down.

Mr Gbenga Omotoso, the Commissioner for Information and Strategy, at a press briefing held at the Bagauda Kaltho Press Centre in Government Secretariat in Alausa, assured that safety would be the main consideration in the deconstruction, saying the press conference was in the spirit of transparency for which the Governor Babajide Sanwo-Oku administration is famous.

He stressed that the deconstruction was agreed upon after extensive consultations with stakeholders, residents and regulators in the built industry.

The Commissioner assured residents in the neighbourhood of their safety throughout the exercise, noting that measures had been put in place to ensure that the contractor maintains the agreed safety protocols.

“The deconstruction will be done with one key focus from all stakeholders; this is the safety of people in the neighbourhood and everybody that will be working on the site. The recommendations of the panel are being implemented to prevent this kind of incident,” Omotoso said.

Commissioner for Special Duties, Mr Tayo Bamgbose-Martins, a civil engineer, assured all that reports on the deconstruction would be regularly shared with the public. He described the contractor as competent.

Forfeited will not be sold to an individual, Commissioner

Commissioner for Physical Planning and Urban Development, Dr Idris Salako, shed light on why the State Government took over the property, saying: “Section 74 of the Urban and Regional Planning and Development Laws of Lagos State 2019 (as amended) prescribes that any property that collapses in the State is automatically forfeited to the Government.”

Salako said the State Government had not decided on what to do with the site after the deconstruction.

He said: “When the State Government is ready to revive the site, we will let the public know what we want to do with it. However, I can assure you that the land will not be given to any individual developer or converted to unapproved use by the Government. The site will be used for something that will be of benefit to the public.”

After the press briefing, the Government’s team moved to Ikoyi to hand over the site to the contractor.