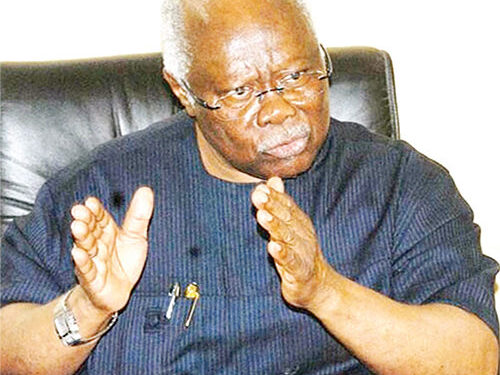 Chief Bode George, former deputy national chairman of the Peoples Democratic Party (PDP) has advised Governor Babajide Sanwo-Olu of Lagos State to ensure that the panel of inquiry to be set up to investigate the collapse of the Ikoyi, 21-storey building is open and independent.

George, who spoke during a press conference on Tuesday said that it is not enough to set up just any panel to probe the needless tragedy, stressing that there is need for comprehensive answers to all that appear presently veiled.

According to him, the guilty must never be spared the full weight of the law, pointing out that there is a need for a full competent team of technical and judicial officers to unravel the disaster.

“The panel must not only be seen to be just and fair in its deliberations, it must show a total resolve on equity and justice. It must be composed of people of legendary excellence and high integrity.

” Let me submit that I strongly believe that to unravel the truth and ensure that the innocent did not perish in vain, the following are the possible lines of enquiries amid all kinds of innuendos and denials from many angles,” George said.

The Atona Odua of Yorubaland said that the fact there the land upon which the collapsed building was erected belonged to defunct Nigeria Telecommunication (NITEL), maintaining that questions like ‘Who bought the land? must be unravelled.

While advising Sanwo-Olu to endeavour to leave a lasting legacy by ensuring that those who lost their lives do not die in vain, George said, “There must be need to answer such questions like, If the land was resold, who is the final beneficiary? If the Fourscore management got an approval for 8-storey structure, who changed it to 15 and then to 21? Who are the structural engineers? Which engineers conducted the soil test? What kind of foundation was the structure erected upon? Is it shallow foundation or strip footing, raft or mat footing?

“Is it deep foundation that will involve piling and drift shaft? What kind of experts were assembled for this project? Who ordered the sealing up of the building earlier? And who ordered its reopening and why? There is a need to establish the structural integrity of the two subsisting buildings lest we risk another disaster,” he said.

He maintained that all the issues must be probed vigorously by a technical committee of builders, engineers, architects and jurists of impeccable distinctions.

“The Six-man committee hurriedly set up by the Lagos state government doesn’t fit the billing. It is at best a gestural, patch up, calm them down affair. It will not work. It lacks the necessary tools of effectiveness that will bring answers to the festering questions that disturb us all. This is one disaster too many. It cannot be swept under the carpet.

“Those who compromised their offices and abetted this monumental loss of lives must face the full wrath of the law no matter their positions. It is only then that some kind of sanity will be brought to bear on the damaged profile of our increasingly distorted environment and that the innocent who perished in the tragic incident would not have died in vain,” George said.