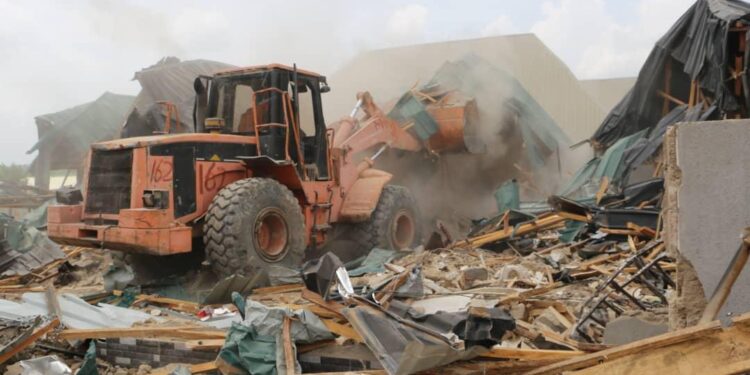 The Federal Capital Territory Administration (FCTA), on Saturday, demolished over 137 illegal structures at Iddo Sarki, a community next to the University of Abuja main campus.

Structures demolished on the illegally acquired land include blocks of hostels, motels and other structures.

The exercise was carried out by a combined team of the FCT Ministerial Committee on City Sanitation, the Department of Development Control, the Department of Security Services, and other relevant agencies, in accordance with a Ministerial directive to remove all contraventions and illegality from the nation’s capital.

Comrade Ikharo Attah, Chairman of the Ministerial Committee on City Sanitation, said despite warnings by the FCT Minister, occupiers have continued to erect structures in defiance.

He said owners and occupiers have defied warning to stay away from  local Chiefs who have  no authority to sell lands or transfer any valid title to buyers of such land, according to the provisions of the Land Use Act.

That exercise, according to Attah, was a fast intervention to avoid further distortion of the city’s growth plans and to save desperate businessmen and women from financial ruin.

He said it was unfortunate that some people continued to ignore timely warnings and enter into land transactions with local chiefs without the approval of the relevant government.

He further stated that, if the illegal hostel blocks and other development projects on the site had followed official procedures, the millions of Naira invested would have been properly directed, had they complied with  official procedures.

He said, “FCT Minister has avowed commitment to espousing investment in the city, but would not tolerate illegalities and disobedience to the provisions of the Land Use Act.

” FCTA is pained about what is going on here. FCT Minister had briefed the Directors of Development Control , security services and DRTS, and had given us a matching order to stop what he termed as extreme illegality here.

” These people were taking advantage of the closeness of the University of Abuja to sell every available land here. You can imagine that someone here had built a house that run into hundreds of millions of Naira, without a proper approval,  but just based on ordinary agreement signed with the Chief on foolscap sheet. That for me is an aberration.
” No one here has any allocation.  It is very sad and worrisome that Abuja is going this way. What the natives are telling people here is that if you buy land and build, before Development Control will come you would have recovered your money.

” The Minister has ordered that this place be cleared as a signal to people. Those who wants to build hostels for student can approach the administration and the University management and do it on Build Operate and Transfer ( BOT ) or Build,  Operate  and Own (BOO) arrangements with a proper allocation and development approval from government,” he added.