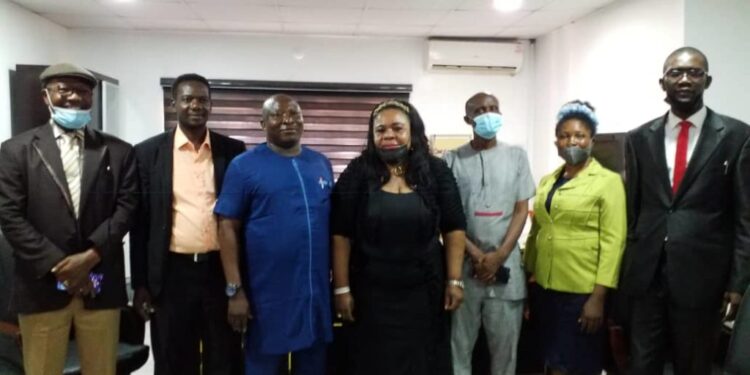 The Delta State Land Recovery Committee constituted to identify undeveloped lands in the state for reallocation to serious developers has submitted its interim report.

The report was submitted to the Commissioner for Lands, Mrs Kate Onianwa at the Ministry of Lands Headquarters, in Asaba on Wednesday.

The Committee which was inaugurated on Tuesday, August 17, 2021, was mandated to physically inspect and identify all undeveloped plots of land allocated over five years ago within the government layouts in the three senatorial districts of the state.

The Committee which had one month to submit its report was also tasked to report any encroachments on state lands irrespective of those behind such acts.

Receiving the reports, State Commissioner for Lands and Surveys, Mrs Kate Onianwa thanked the Committee members for their diligence in carrying out the assignment and urged them to work harder to submit the final report.

“I want to thank the Committee for a job well done. It’s a selfless job and from the report, we got from the field we knew you did a very good job because you threaded on grounds people dreaded.

“We got several calls but we told them you were doing your work duly assigned to you by the state government.

“This is an interim report and I can assure you that this report will be judiciously used and your efforts will not be thwarted.

“I can assure you that the Governor is happy with what you have done and we look forward to the presentation of the final report,” she assured.

Earlier in their presentation, the Committee Chairmen led by Ogaga Omonade Delta North; Mrs Peace Ogba Delta South; and Efe Appih Delta Central thanked the Commissioner for giving them the opportunity to serve.

They pledged to submit a final report in no distant time.

Present during the presentation of the reports were the Chairman State Land Allocation Committee, Prince Godwin Ogorugba; Permanent Secretary Ministry of Lands and Surveys, Mr Precious Anuku and top officials of the Ministry.