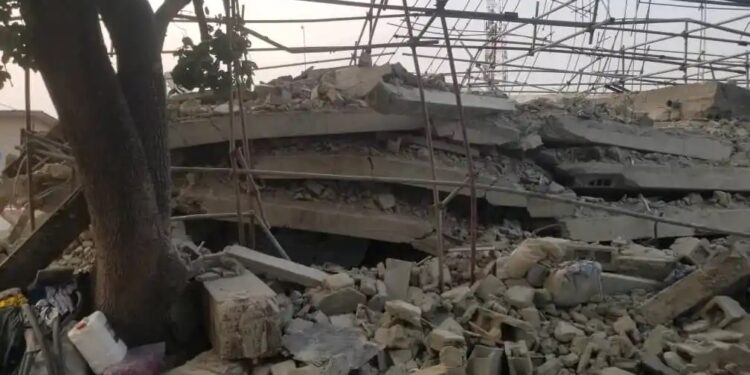 The Lagos State Government says it has arrested the developer of the three-storey building under construction that collapsed at 16, Akanbi Crescent, Onike, Yaba, Lagos on Saturday afternoon.

The eagleonline reports that the State Commissioner for Physical Planning and Urban Development, Dr. Idris Salako, confirmed this in a statement.

Salako said: “The government moved in swiftly to minimize impact at the site around 3.30 p.m. on Saturday.

”Preliminary findings indicated that the site had been sealed off twice by the Lagos State Building Control Agency in 2021 for non-compliance with building regulations, after which the site was abandoned.

“However, the developer later broke the government seal, sneaked into the site and recommenced construction without official authorisation.

“As at 9 pm, one person had been pulled out alive, while two deaths were recorded.

“The developer in charge of the site has since been arrested and handed over to police, while rescue operation is ongoing.”

However, based on the latest information, the death toll from the collapsed building has risen to three.

This was as one more dead body was recovered Saturday afternoon.

This raised the death toll to three, while the number of rescued persons remained two, just as rescue efforts are still on.

Farinloye said that the building was said to have given signs with rubles falling from it on Thursday.

He added: “It was gathered that when one of the neighbours called their attention to it, they told him off that it was as a result of work going on.

“However, close observations revealed that the building had tilted forward.”

The Zonal Coordinator, however, said that proper investigation on the case of the collapse will be carried out by the state government.

This, Farinloye noted, is to determine the cause of the collapse after the emergency phase at the site.