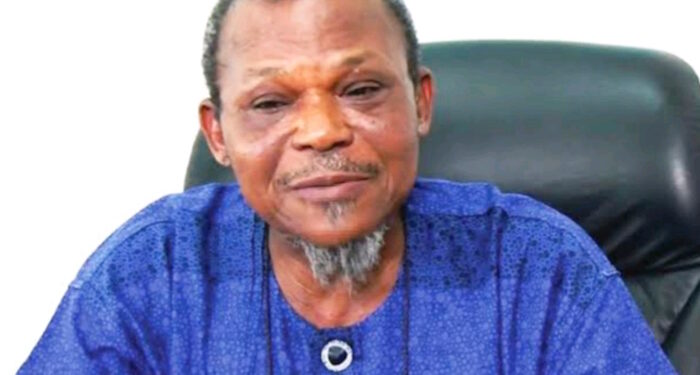 The Lagos State Governor, Mr. Babajide Sanwo-Olu has named the State Housing Estate in Gbagada after the late Leader of the National Democratic Coalition (NADECO) and former Military Administrator of the state, Rear Admiral Ndubuisi Kanu

Governor Sanwo-Olu made the announcement during ‘A Day of Tributes in Honour of An Officer and Gentleman, Rear Admiral Ndubuisi Kanu, held in Lagos on Wednesday.

Sanwo-Olu said the Gbagada Estate, which is expected to be commissioned later this year, was named after Rear Admiral Ndubuisi Kanu to demonstrate to others that Lagos State will never forget her heroes.

“It is our hope that every time outstanding and heroic leadership is recognised and rewarded, new leaders will be inspired to emerge and continue from where the departing generation left off,” he said.

However, as Nigerians from all walks of life continued to eulogise the late Military Administrator of Lagos State, the National Leader of the All Progressives Congress (APC), Asiwaju Bola Ahmed Tinubu, who was represented at the event by Femi Pedro described the late Kanu as “A brother and friend to Asiwaju Bola Ahmed Tinubu. In the struggle for democracy, they were in the trenches together. He was a rare breed of a man. He was consistent and committed to democracy.”

According to Pedro, “There was no Lagos State event that Kanu did not attend. Kanu participated actively in Lagos activities. He worked with Tinubu for the betterment of Lagos State.”

Asiwaju described him “As a true Nigerian nationalist in every sense. The late Kanu demonstrated true belief in the progress of Lagos and offered meaningful advice for the progress of the state.

Earlier, Governor Sanwo-Olu, said: “Admiral Ndubuisi Kanu was a visionary and courageous governor of Lagos State. He led a remarkable life. He was one of those who laid the foundation for modern Lagos.”

According to the governor, “It is interesting and perhaps apt to note that even after the dawning of democracy, Kanu continued to be a strong champion for the sustenance of the rule of law. In every chapter of his life, Rear Admiral Kanu showed true courage, strength and leadership.”

One thing that really struck me about the departed patriot, Sanwo-Olu said, was Kanu’s Spartan lifestyle.

The governor said: “In spite of the several privileged public offices he occupied, he did not exploit them for personal aggrandisement.

“He lived a life devoid of the usual perks and privileges that one might associate with a two-time military governor. He made himself available and accessible to everyone, regardless of class or status.

“Alongside this, he also was a man who loved his roots, was very proud of his origins and was a proud and active member of the pan-Igbo socio-cultural organisation, Ohanaeze Ndigbo.

“All of us, as Nigerians, have a lot to learn from the ideals that Kanu lived for: simplicity, humility, courage, and a sense of service and of conviction.”

Also, his wife, Josephine Kanu, described him as “My soul-mate and true love. For half a century, he was my friend and confidant. He has left a huge void and only God can fill it.”

Jeffery Ndubuisi Kanu, son of the deceased, described him as “A great and simple man. He was a symbol of simplicity, he was a true Nigerian.”

President, Ohanaeze Ndigbo, Lagos State chapter, Solomon Ogbonna, described the late Kanu as “One of the most honest Igbo men I ever met. He didn’t believe in segregation. He believed in the Scripture and acted on it.”