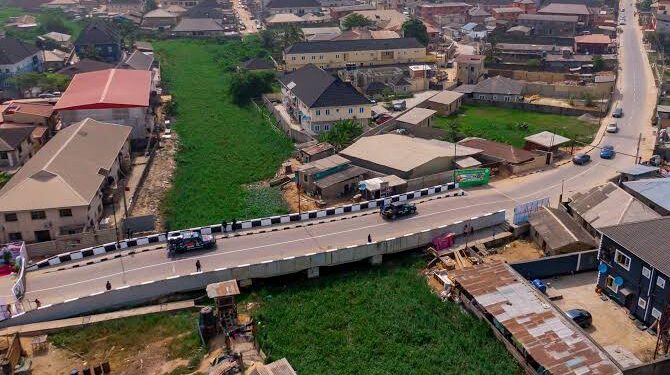 Lagos State Government has inaugurated the construction of Ojota-Opebi link bridges and approach roads to ease congestion in Ikeja and environs.

Commenting on the project during the inauguration, Lagos State Governor, Babajide Sanwo-Olu said the project was an innovative solution to the perennial gridlock around Opebi, Mobolaji Bank Anthony Way, Ojota, and the Mende corridor.

He said the project would reduce travel time for Lagos and Ikorodu bound traffic from Opebi; and ease gridlock at the Opebi-Sheraton Link Road and Mobolaji Bank Anthony Way.

He said, “As you are aware, there is presently no direct link between Opebi, Maryland and Ojota.

“Consequently, we recognised the need to provide another Legacy Project by constructing the Ojota–Opebi Link Bridge and Approach Roads to connect Opebi Road from its tail end with Lagos-Ikorodu Road by Odo Iya-Alaro. This will invariably reduce travel time for Lagos and Ikorodu bound traffic from Opebi. It will also ease the traffic situation at Opebi-Sheraton Link Road and Mobolaji Bank Anthony Way. This Legacy Project will provide a new link to commute around Ikeja and its environs. It will also act as a relief to the saturated and over-burdened routes within Ikeja.”

The governor said the project was another milestone in the implementation of the Traffic Management and Transportation Pillar of his administration’s THEMES Agenda and the State Strategic Transport Master Plan.

Sanwo-Olu expressed his administration’s commitment to the welfare and well-being of residents and to the Greater Lagos Vision, adding that the project connecting two local council areas would enhance the livelihood of residents.