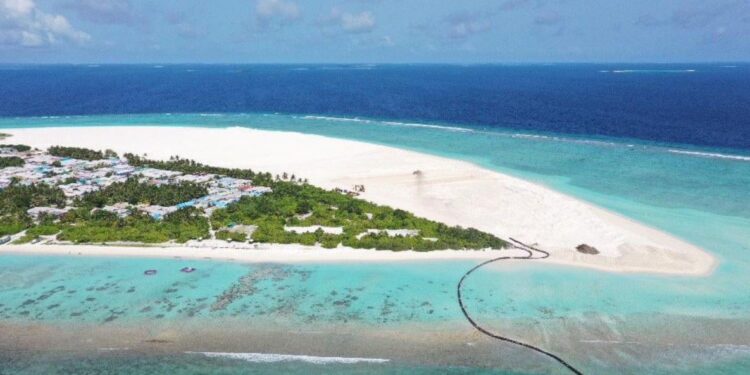 Maldives President is set to sign off a $147 million land reclamation project on Addu atoll, despite warnings of “irreversible damage” to the environment.

Per Climate Change reports, the developers plan to pump 7 million cubic metres of sand and mud from a central lagoon to build five four-star resorts and extend urban areas of Addu, the southernmost atoll of the Indian Ocean state. Addu is home to 20,000 people on six thin strips of land surrounding a lagoon

The project is popular with islanders hoping for jobs and better housing but comes at the cost of “significant irreversible damages” to the lagoon and surrounding reefs, according to a 751-page environmental impact assessment (EIA).

As reported, the government is known for its forceful climate advocacy on behalf of sinking island nations. Former president Mohamed Nasheed once hosted a cabinet meeting under water to draw attention to rising sea levels and at Cop26 in Glasgow, Aminath co-chaired talks on adapting to climate change.

The proposed development will use dredging ships to draw sand from the bottom of the lagoon and dump it in shallow water to make a solid base to build on.

This process harms plants and sea creatures both by sucking them up from the seabed and by stirring up sediment so the water becomes murky, according to the EIA.

The dredging is designed to develop Addu’s tourism industry but it could backfire. Addu has few direct international flights so most visitors take an expensive, 90-minute connecting plane from the Maldives capital Male.