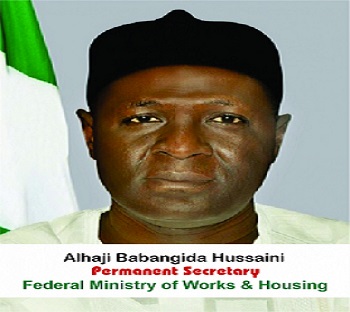 The Permanent Secretary, Federal Ministry of Works and Housing, Babangida Hussaini has appealed to the public to desist from destroying public utilities.

Besides, the Permanent Secretary implored Nigerians to assist the government in its effort to preserve them for the good of the nation

Hussaini gave the warning recently during a routine inspection of the ongoing Abuja – Kano road project and coincidentally saw some women burning tyres under the bridge of a railway crossing along Zaria-Kano section of the expressway.

In a statement on Tuesday signed by Boade Akinola, Director Press and Public Relations, he queried the rationale for destruction of bridges, roads and other public utilities, saying, “This is putting the government and public life in danger ”

The Perm Secretary was forced to cut short his tour the moment he spotted some women burning tyres under the bridge by the railway crossing along Zaria-Kano section of the road, and address the women.
Hussaini described the act as capable of outing the lives of the citizens in danger and an attempt to waste resources of the government.
He argued that such acts will draw back the efforts of President Muhammadu Buhari at providing quality road infrastructure for the good of Nigerians.

Angered by the destructive act, the Permanent Secretary warned the women and others to desist from such activities henceforth.
He implored them to see government’s properties as their personal property so that they protect and preserve them jealously

In their reactions, one of the women caught in the act said that, they only saw some other people burning tyres under the bridge and that they only joined without knowing the implications.