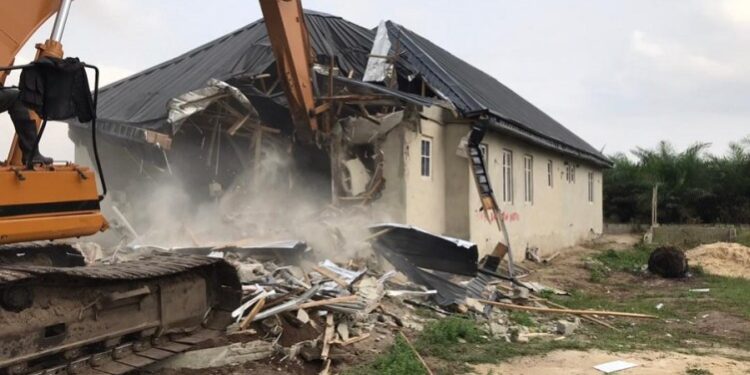 Officials of the Federal Capital Territory Administration (FCTA) raided and demolished unlawful structures in the Iddo Sabo community on Tuesday.
Among the structures that fell to the FCTA bulldozers were worship centres, residential buildings, stores, and shanties cleared as part of ongoing clearance of illegal constructions along the corridors of Abuja Airport road.
The team also destroyed schools, vocational workshops, block-making industries and unfinished structures, among the others.
Besides, the team, which included security personnel and representatives from the FCT Administration, also returned to the area and cleared one worship Centre and residential buildings in the Iddo Sarki hamlet to complete the work they had begun in recent weeks.
Speaking on the exercise, the Chairman, FCT Ministerial Taskforce on City Sanitation, Comrade Ikharo Attah said it is going to be a comprehensive removal of all the infractions in the community, especially those near the road corridors.
His words: “We started the exercise in Iddo Sabo. What we did today is like a demolition rehearsal, because we have not started doing what we are supposed to do here.
“We have to spend time to work here because the illegality committed here is very ugly.
“A year and half ago, there were very few structures, which we hardly see from the Airport road, but as we speak now, the structures are very massive in their numbers, and it is a worrisome development.
“The land was hitherto been used by the locals for farming activities pending when they are fully resettled are now converted into a massive housing site.”
He, however, advised property developers to desist from the acquisition of land from village chiefs to escape the consequences of contravening the FCT land use Act.