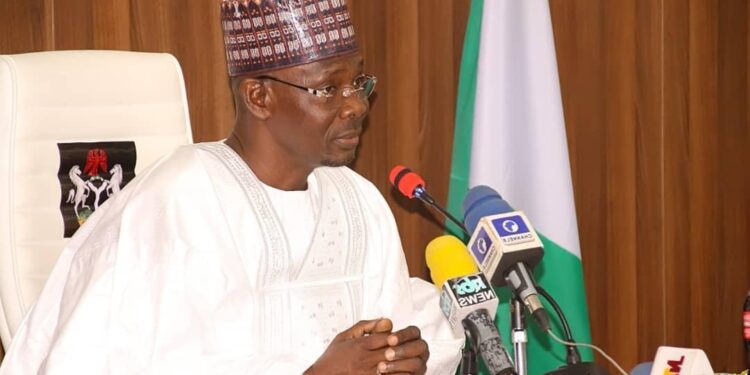 Share on FacebookShare on TwitterShare on WhatsappShare on Telegram
Nasarawa State Governor, Abdullahi Sule, Wednesday, signed a Memorandum of Understanding (MoU) with Family Homes Fund (FHF) and Federal Mortgage Bank to deliver 2, 000 houses worth N11 billion to civil servants in the state.
The Governor, who signed the tripartite agreement in Lafia explained that the MoU formed part of the cardinal objectives of his government as captured in the Nasarawa State Economic Development Strategies (NEDS).
He said the provision of housing was one of the important things his administration intends to achieve to change the fortunate of civil servants to better in the state.
The governor explained that the housing units would be provided for servants earning below N100, 000 monthly.
Sule said, “The agreement would create wealth, employment opportunity, create development, boost economic activities in the state as well as provide homes for the less privileged.
“When the work on the housing project commences, it would employ over 20, 000 youths, thereby taking them off the streets.
“This would also help in addressing youth restiveness in the state given the insecurity,” the Governor added
He also commended President Muhammadu Buhari for initiating the idea to care for the less privileged by providing housing for them to call their homes.
Earlier, Femi Adewale, Managing Director (MD) Family Homes Fund lauded the state government for the partnership and promised that workers would enjoy the initiative to make them proud house owners.
Adewale described the signing of the MoU as a landmark achievement to his firm, saying it would allow the company to help towards providing houses for low and medium-income earners, thereby improving the quality of their lives.
According to him, the company would invest N6 billion at the initial stage and invest another N5 billion as the project progresses.
Ahmed Danjuma, Managing Director, Federal Mortgage Bank said the bank has been partnering with Nasarawa State Government for some time now.
Danjuma, represented by Oladepo Fakeye, Group Head Strategy, explained that the bank was in charge of the management of the National Housing Fund to provide housing for the public and private workforce.