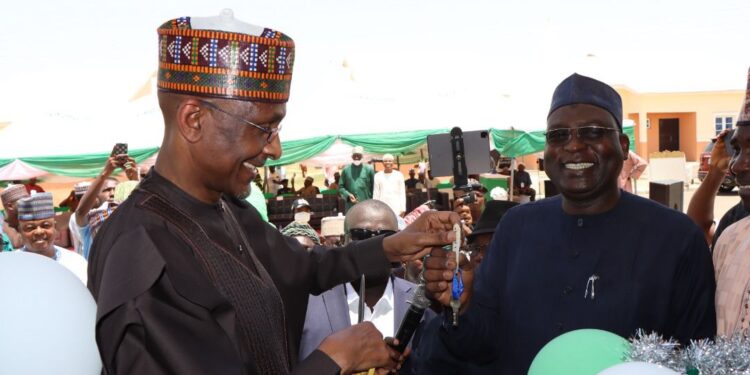 The Honourable Minister of Works and Housing, Mr. Babatunde Raji Fashola has officially handed over keys to four beneficiaries who have fully paid for the houses for sale.

The houses were built under the first phase of the National Housing Programme (NHP) in Kano, Kano State.

Mr. Bashir Nura Alkali, Permanent Secretary, Ministry of Works and Housing, who represented the Minister at the event expressed the federal government willingness to welcome those who can afford to pay outright.

A statement signed by Blessing Lere –Adams, Director, Press and Public Relations, on Thursday, the Minister stated, “It is not a condition for eligibility and we have offered flexible payment options like Mortgages and Rent-to-Own which we encourage applicants to pursue.

“Some of the requirements for qualification to access these houses and to be uploaded on the web-portal includes: Current Passport Photograph in JPEG or PNG format; Most recent copy of your current tax clearance / pay slip in PDF format; Means of Identification (National ID, Driver license, International Passport) in digital JPEG format; Letter of recommendation from any Primary Mortgage (for Mortgage Subscribers) and Evidence of 10% initial payment deposit (for Mortgage Subscribers only).”

The statement added, “The beneficiaries today are therefore among the first set of Nigerians other than the 1994 Super Eagles who have been handed the keys to their houses promised by the Federal Government over 28years ago.”

Speaking earlier, the Permanent Secretary Federal Ministry of Works and Housing, Mr. Bashir Nura Alkali who was represented by Director Public Building and Housing Development in the Ministry, Arc. Solomon Labafilo, said, “The housing types are currently available for sale to all Nigerians through the Ministry’s web portal https://nhp.worksandhousing.gov.ng comprise of 1 Bedroom, 2 Bedroom and 3 Bedroom semi-detached bungalows and condominiums.”

Alkali said, “The Philosophy behind the National Housing Programme is the provision of pilot scheme that is affordable, accessible and acceptable as contained in the National Housing Policy.
” The approach to the design and use of materials take cognizance of the cultural and climatic peculiarities of the regions while responding also to the tenets of the Building Energy and Efficiency Code (BEEC) being championed by the Ministry.

“I welcome you all once again to the handing over of keys to Nigerians who have complied with the requirements of the sale and who have fully paid for the houses in Kano State,” he remarked.

Speaking on behalf of the host community, Chairman of Fagge Local Government Area,Kano State, Alhaji Ibrahim Shehu thanked everyone that witnessed the hand over of keys to beneficiaries of the National Housing Programme in Fagge.

He described Fagge as a mini Nigeria in Kano State because all tribes are present.
He appreciated the Federal Government for the housing project, saying “Our Local Government is not left behind.”

One of the beneficiaries and retired civil servant, Mr.Farouk Adamu who spoke on behalf of others said, “I thank the Federal Government. The process of acquiring these houses is easy and simple. Anyone who says that he has used influence to obtain the house I will tell him it is not true. We applied through the portal that the Ministry opened. We were lucky to be selected.”

“This is what Nigerians are waiting to see , especially the less privilege citizens to get things without lobby or having to know ” one big man “, he commented.

Another beneficiary, the Manager of Spraywell & Finch Solutions Ltd, Mr. Henry Obi was happy to say, ‘’ there was no human interference in the process of getting selected. You only get your confirmation via email and the infrastructure in the estate is qualitative with expected finishing of the buildings in order. The building is worth the money paid for it. I will recommend that Nigerians go for the National Housing Programme,’’ Obi advised.