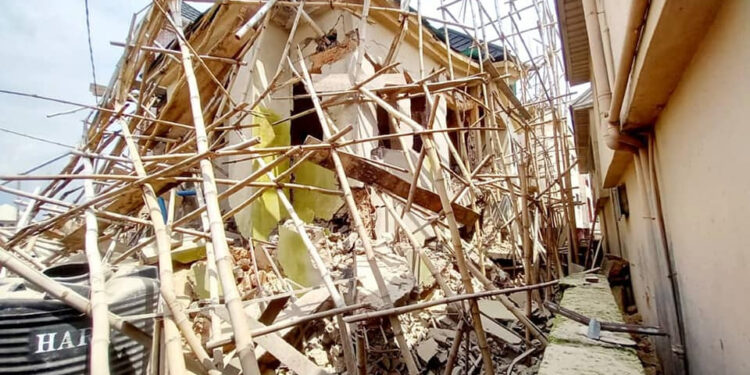 Sources estimated that the building that fell on adjoining building led to the is property worth millions of Naira.

It was gathered that substantial part of the building which was said to be a subject of litigation crumbled when residents were preparing to go out for their daily businesses.

The neighbour of the owner of the collapsed building  Mr. Clement Ojukwu, told reporters that the collapsed structure destroyed a wing of his house, causing extensive damages to three of his big generating sets.

He said: “I left home at about 07.15am, but about 40 minutes later I got an urgent call from one of my neighbours to rush back home immediately.

“He said the new multi-storey building beside my house under construction had collapsed.
He said no one knows whether my wife who was cooking in the family kitchen when I left was trapped under the debris.

“I pleaded with him to mobilize people to assist in searching and ascertaining if my wife was safe, before I get back.”

Ojukwu said he was filled with joy when the wife called him few minutes later informing him of how she narrowly escaped death as the building under construction in the next compound collapsed.

“Sadly”, he continued, the owner of the building is a brother and friend. I had in the progress of the construction called and intimated him that it was not only close to my house but that it was dangerously transversing into my compound/building.

“His response was that his father told him that one talks about boundary on the ground, not up or in the air. So as he continued with the project, finished the first decking, and started the second, I was forced to go to court to stop him, ” he added.

However, the owner of the collapsed building could not be reached as he was said to have gone into hiding.

Neighbours said nobody has seen him since the unfortunate incident occurred earlier in the morning. 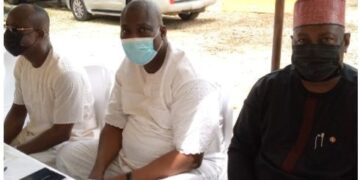