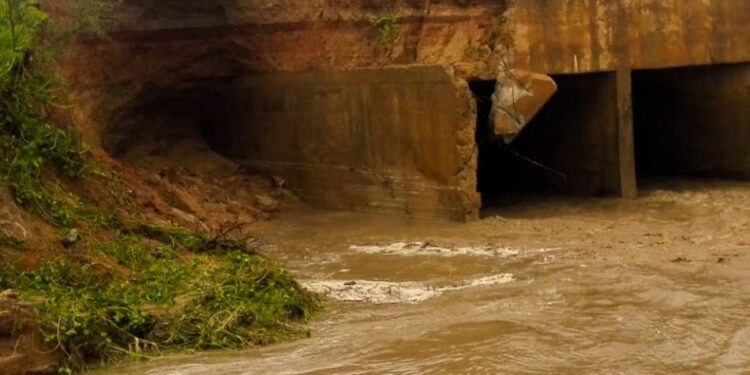 No fewer than 200 residents of Osogbo, the capital and it’s environs in Osun State became homeless as flood ravaged residential buildings in major towns.

Besides, the flood destroyed the Awosuru bridge which linked First Bank Area to Alekuwodo leading to traffic congestion within the metropolis.

Report said the intense flooding of the areas resulted in submerging a number of houses and destroyed property worth millions of naira as
many residents lamented the loss of their belongings.

Residents who were rendered homeless have appealed to the Osun State governor, Alhaji Oyetola to come to their aid with necessary interventions.

A shop owner at the Alekuwodo area, Abike Adewole, a cement dealer told newsmen that the rains started around 8 pm.
“I was in my shop when the rain started but I didn’t know it was going to be like this.

“The flood took over everywhere, it was God’s intervention that saved all of us here,” he said.

While estimating his loss, she said items destroyed in his shop were worth around N5 million.

Residents of the area told journalists that the rest of being swept by the flood forced them to abandon their home as the level of the flood rises late in the night.
.Reacting, Governor Adegboyega Oyetola assured the citizens of the state and appealed for calmness.

The Government in a statement signed by Commissioner for Information and Civic Orientation, Mrs Funke Egbemode assured victims of the flood disaster that government was already assessing the impact of the flood .

The statement read: “The Government of the State of Osun wishes to call for calm among citizens, and assure victims of Tuesday’s flood disaster in the state that government is already assessing the impact of the flood .

“Government has activated its emergency response system, comprising stakeholders in disaster management, which include environmental management officers, health workers and security agencies, to respond efficiently to the incident where necessary.

“The government, therefore, appeals to those who this sad incident has affected in any way to remain calm and await prompt and lasting solution in the overall interest of the state.
“Citizens are also advised to be vigilant in the wake of the season’s downpour of varying intensity, and desist from unsafe waste disposal which poses greater hazards to the environment.

“The government is mindful of its responsibilities to protect lves and property under all circumstances, and it shall continue to do so at all times,” the statement added.