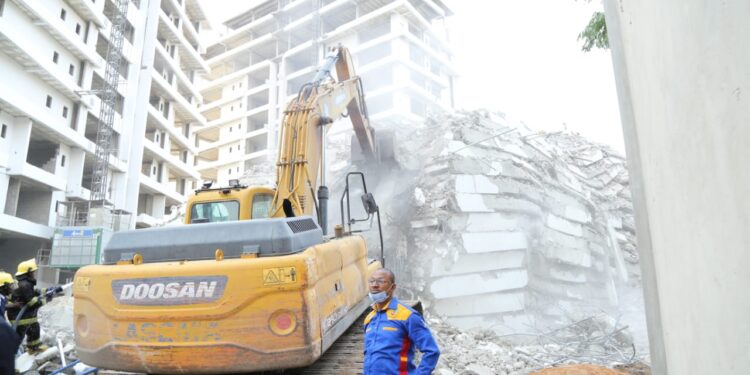 A -21-storey building under construction which collapsed on Gerard Road, Ikoyi, Lagos State on Monday resulted in the trapping of many workers, while a witness as at the time of this report said five dead bodies were seen at the top of the rubble of the building.

A report said that the General Manager, Lagos State Building Control Agency (LASBCA), Gbolahan Oki, disclosed that the owner of the collapsed 21-storey building was approved to construct only 15 floors.

A sight engineer, who anonymously disclosed that the integrity of the building had been in doubt having experienced vibrations at different periods.

Besides, reports added that as of 5.45 pm excavators from the relevant agencies were still been expected as crowd control remained a challenge at the scene, but some youths were noticed trying to salvage the situation

The General Manager, Lagos State Building Control Agency (LASBCA), Gbolahan Oki, speaking further said the owner of the property has been arrested and would face the law following the death of some people at the site.

Oki added that at the time of filing this report four people were rescued and three people died, adding that rescue efforts were still ongoing, stressing that efforts were ongoing to rescue more victims.