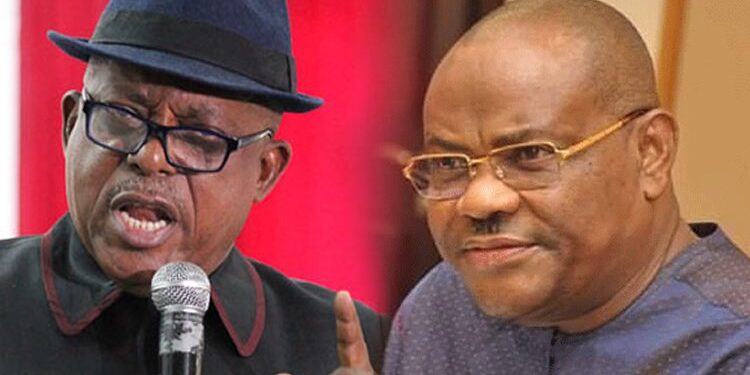 The raging feud between the suspended National Chairman of the opposition People’s Democratic Party (PDP), Prince Uche Secondus, and his estranged benefactor, Rivers State’s Governor, Nyesom Wike has escalated into a dirty grudge fight.
THEWILL authoritatively gathered that the battle for the control of Wadata House, the PDP’s National Headquarters, has shifted to their native Rivers State, with Wike allegedly threatening to revoke the Certificates of Occupancy of all properties belonging to Secondus in the state if he does not step down as party Chairman and withdraw his interest in seeking re-election at the party’s forthcoming National Convention later this year.
A senior party source familiar with developments told THEWILL that the Governor allegedly issued the threat when he met with a respected member of the party, who had seen him privately to resolve his bitter quarrel with Secondus, some hours ago.
Secondus is believed to own multiple properties in Rivers State valued at billions of naira.
“Some of these properties he acquired as far back 1999,” a close associate of the embattled politician told THEWILL.
THEWILL reports that Wike and Secondus are enmeshed in a battle over Wike’s successor and the 2023 presidential election.
The Governor, who facilitated Secondus’ election as party National Chairman, has lost trust in him after he did not support the Governor Aminu Tambuwal and Wike joint presidential ticket bid in 2019 and also did not back Wike’s preferred candidate in the 2019 governorship primary of their party in Bayelsa State.
“Wike’s play is to have a firmer grip on the national executive of the party and the only way that can happen is if Secondus is gone,” one party source said.
THEWILL reports that a Rivers State High Court had on Monday issued an order restraining Secondus from parading himself as Chairman and from taking part in any activity of the party while the order subsists.
Wike is believed to be the orchestrator of this move.