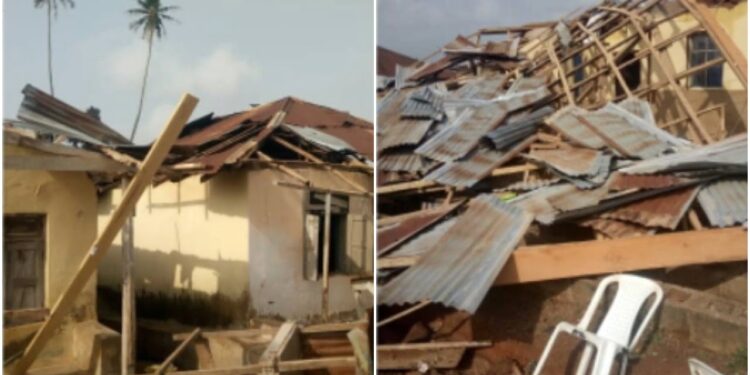 Over 500 Houses were destroyed by rainstorms in Ise- Ekiti and Orun- Ekiti after a heavy downpour in the two communities on Thursday.

The phenomenon described as unprecedented rendered many homeless.

Amongst the buildings affected are Ansar-ul-Deen Central Mosque, Ise- Ekiti and Saint Stephen’s Primary School as well as part of the Palace of the traditional ruler of Orun-Ekiti ,Oba Zaccheus Adewumi.

Many residents rendered homeless expressed shock as shops, bakeries, viewing centers and residential buildings’ roofing were completely blown off by the storm.

Sources gathered from the locals that the heavy downpour which lasted for about one hour was accompanied by a devastating whirlwind that blew off rooftops and also destroyed some farmlands .

The Chairman, Ise -Orun Local Governments, Hon Ayo Akinluyi, who led the Chairman, Ekiti State Emergency Management Agency (SEMA),Captain Sunday Adebomi and officials of the National Emergency Management Agency (NEMA) on the spot assessment of the affected areas described the damage as massive.
The NEMA team was led by the Director of Operations, Mr Abdulkadir Olanrewaju .

Expressing sadness over the incident, the Arinjale of Ise-Ekiti, Oba Ayodele Ajayi lamented that he had never witnessed such magnitude of disaster since he ascended the throne of his forefathers.

Oba Ajayi, therefore, enjoined the disaster management officials to assist the two communities by presenting their cases to the appropriate authorities.

The monarch also promised to seek assistance from some well-to-do sons and daughters of the town in providing temporary support for the victims.

” I am saddened by the level of carnage in the two communities. I want to tell you that I have never witnessed such in my life. I had to personally go round to see the extent of damage. Though, we thanked God Almighty that there was no casualty in spite of huge damage except that the victims would be subjected to another round of social pressure .”

In his remarks, Captain Adebomi who incidentally is from Ise-Ekiti disclosed that he was inundated with barrage of distress calls from the affected households.

Adebomi, a retired United State Army officer, who sympathised with the monarchs and the people of the two communities also promised to every thing within his powers to get them assistance from government.

The SEMA boss urged the victims to come forward with proper documentation of affected properties inorder to secure Relief Materials from government.

Adebomi also urged the victims to liaise with the council officials as well as their elected representatives for prompt documentation.

However, Hon Akinluyi disclosed that the extent of damage was beyond the council’s capacity to bear and explained that part of the steps taken so far was to assist to victims to relocate their family houses.

Egypt moves to implement housing projects for all social brackets