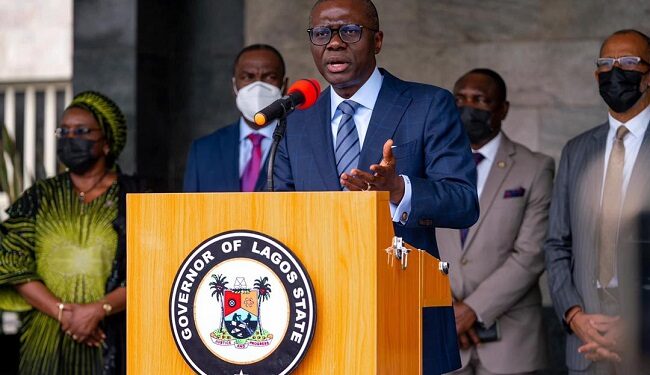 To meet the housing needs of its people, the Lagos State government on Tuesday unveiled 774 housing units at Sangotedo area of the state.
Governor Babajide Sanwo-Olu, while speaking at the commissioning the 744 Units LagosHOMS Sangotedo Housing Scheme (Phase 1).

The scheme comprise 248 One-bedroom, (a room self contained) 248 2-bedroom and 248 3-bedroom homes, which is the largest housing scheme to be completed by his administration.
Besides, Sanwo-Olu said that apart from fostering an enabling environment for family life and for raising future leaders, homes in decent and well planned communities help in reducing occurences of security issues to the minimum.
He noted that humanity is well preserved and protected when decent shelter is made available, describing decent shelter provision as the base upon which other socio-economic activities can be built.
The governor said: “In an urban setting like ours and given attendant challenges of uncontrolled immigration into the state, it behoves on us as your own government to intervene in this sector so as to give succor to as many people as possible.
“In utilizing the THEMES agenda as a policy compass for achieving the Greater Lagos dream, the provision of decent homes is placed under the Pillar of Making Lagos a 21st Century Economy . “This addresses our ultimate goal in housing development. We don’t only build houses, we create homes in livable communities. We provide supporting infrastructure within these environment to add value to the lives of our people.
“We promote a sense of togetherness that transcends our tribal, religious and political differences.
“This is our own answer to the need to build bridges and promote the emergence of new communities that are resilient and responsive to both communal and individual yearnings of their members.”
The governor added that everyone can benefit from state housing schemes, saying that is the reason the state government is deepening its activities in the area of land allocation and speeding up the formalization procedures for land acquisition.
“We are going ahead with the plans for full excision on all untitled lands. This is to ensure orderliness and sanity in this important sector with the aim of tackling the problem of land grabbing in Lagos State. The menace of land grabbing is a major turn off for both individuals and private sector real estate investors . In putting this plan into reality , all stakeholders will be carried along to enable us have a formal and documented delineation on communal land and family land.
“A technical committee will be inaugurated to smoothen the implementation of the excision process. It is our hope that at the end of the process, all untitled land will be covered by Certificate of Occupancy (C-of-O) for transparency in sales or transfer of landed assets, the governor said.
Governor Sanwo-Olu insisted that the state government is set for the enforcement of a monthly tenancy on property occupancy from 2022, adding that it is confirmed that the percentage of residents depending on tenancy arrangement for housing in Lagos State is quite high.
“While building homes for those with home ownership dreams, we are also determined to cater for numerous others who may not have plans to own homes bit have immediate needs for decent shelter,” he said.
On his part, the state’s Commissioner for Housing, Moruf Akinderu-Fatai, said that within the past 26 months, in line with its pledge and mandate, the state government has delivered 14 housing schemes in various parts of the state.
He added that the projects achieved via the Ministry of Housing, Lagos State Property and Development Corporation, and Joint Ventures with private investors have brought into being livable communities that are adding values to the lives of many people.
The Commissioner said:”Sangotedo Phase 1 consists of 744 homes in 62 blocks of 12 homes each. There are 248 one bed, 248 two bedroom and 248 three bedroom apartments in this scheme. It is important to note that this estate is the largest of the LagosHoms schemes and will impact greatly on the housing deficit statistics in the State. When the Phase 2 of the scheme is delivered in due course, there will be an additional 444 homes to the housing stock in the area. The infrastructural components in this estate include a network of well structured roads, adequate drainage system, perimeter fence, sewage treatment plant ,water treatment plant and electricity.”
Akinderu-Fatai expressed optimism that with a focussed leadership like that of Mr. Babajide Sanwo Olu, the state would continue to soar higher and higher with each day bringing us closer to the preferred future of providing adequate housing for all citizens within our space.
It is therefore with utmost delight and a heart filled with appreciation to God that I welcome you all to the commissioning of LagosHOMS Sangotedo Phase 1.
He added that the completion of this scheme brings to us all the joy of fulfilment because of the immense benefits being added to the lives of the people of Lagos State, particularly those in Eti-Osa area.