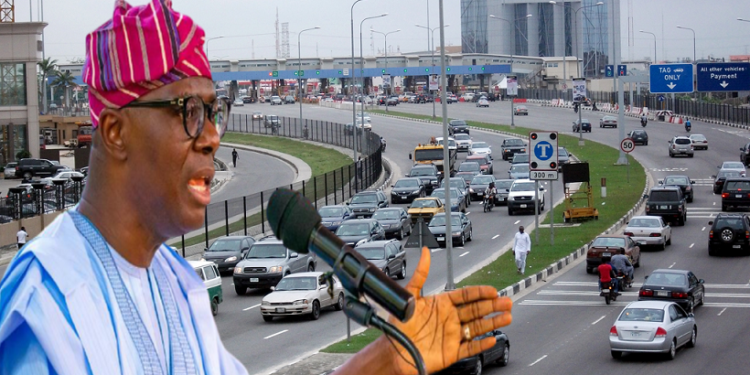 Lagos State Governor, Mr. Babajide Sanwo-Olu has assured that the construction of the 18.7-kilometre six-lane rigid pavement carriageway from Eleko Junction in Ibeju Lekki to Epe T-junction will be completed and commissioned.
Sanwo-Olu gave the assurance as he and members of the State Executive Council went on an on-the-spot assessment of the project, saying the project would be delivered by the first quarter of 2022.
Excited at the pace of work on the road, the Governor persuade the contractor handling the project to increase its momentum to push the progress to an encouraging level before the end of the year.
The Governor flagged off the first phase of the expansion on the Lekki-Epe Expressway last November, kick-starting the rehabilitation of the 40-year-old infrastructure.
The second phase of the project, which will start later this year, stretches 26.7Km from Eleko Junction to Abraham Adesanya Junction in the Eti-Osa axis.
At the time of the Governor’s inspection, the contractor had completed a stretch of 3km on the lane from Eleko Junction inward Epe, while the right-of-way for the entire project has been fully cleared.
After communicating the work progress to the Governor, representatives of the contractor led Sanwo-Olu and cabinet members on legwork for assessment of features on the completed stretch, including drainage channels, kerb and segregated lane for heavy-duty vehicles.
He expresses optimism that the ongoing project would be delivered on record time and urged the contractor to scale up the pace of work.
“This exercise is an on-the-spot assessment to view the status of the 18.7Km six-lane rigid pavement road construction we are doing from Eleko Junction to Epe. The contractor has been active on-site in the last six months, and they have touched every part of the entire stretch.
He added: “We are currently assessing the project from the 3km lane already completed. On either side are three lanes. Two lanes are for cars, while the last lane is for heavy-duty vehicles. There will be a 1.5km pedestrian walkway on both sides.
“We are happy with the progress of the project because the contractor works day and night. I believe the work is on track. Residents on this corridor are also happy with the level of work done. They are waiting on us to hand over this important infrastructure to them in earnest.
“The beauty of the work is that it has reduced the journey time, even as the road is still being constructed. There is no hindrance on the road; motorists have the right-of-way for free movement. Not until when we finish the entire construction, we would have the full benefit of this investment. We are happy with what we have seen and we believe that the contractor should be rounding off the work by end of this year or the first quarter next year.”