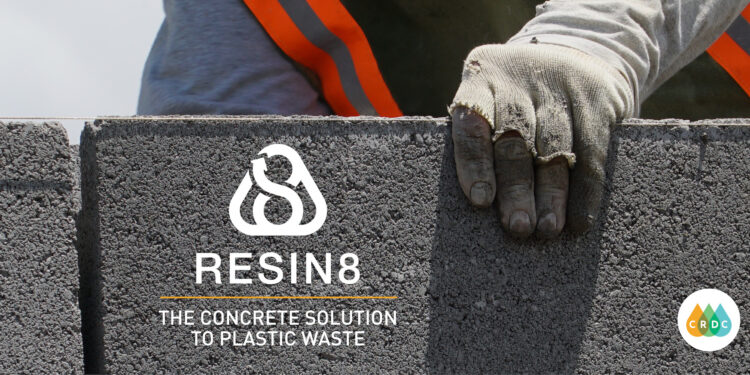 South Africa is testing the use of RESIN8, a concrete modifier made from mixed plastic waste of all types to incorporate them into building blocks and other elements such as pavers and drainage pipes.

The concrete modifier simulates construction sand and aggregates – materials that are themselves in short supply globally. By improving the mechanical and chemical bond to cement, the product improves the structural thermal and environmental properties of concrete products; structural or non-structural, such as concrete blocks and pavers, pre-cast elements or poured in place concrete.

CRDC’s South African CEO, Brett Jordaan said: “In addition to the pilot plant at Cape Concrete Works, 12 different companies have shown an interest in the product and projections indicate that up to 21 large scale RESIN8 manufacturing facilities could soon be established each with a processing capacity of 14 000 tons of plastic waste p.a.”

“This can make a huge dent in the discarded plastic problem the country faces (estimated at 250 000 tons pa) while creating jobs for collectors and waste pickers who will be incentivized to collect what is now seen as a valuable commodity”.

“We see the introduction of RESIN8 as a vital component of the forthcoming introduction of the EPR (Extended Producer Responsibility) legislation which makes producers, brand owners and suppliers of plastic packaging materials and e-waste accountable for their responsible disposal. Recyclable plastics can go to the recyclers, the rest can turned into RESIN8!”

The product is undergoing trials and testing at the Cape Concrete Works in Blackheath where a pilot plant has been established with the intention of scaling up the plant to produce 1 000 tons/month of RESIN8, which will translate into thousands of tons of end-concrete products. The first local project utilising RESIN8 entails construction of a 5 000 social housing project, commencing this year under the management of construction company Martin & East.

Some of the other benefits of RESIN8 include decreased weight, greater structural strength, and 20% more thermally efficient.