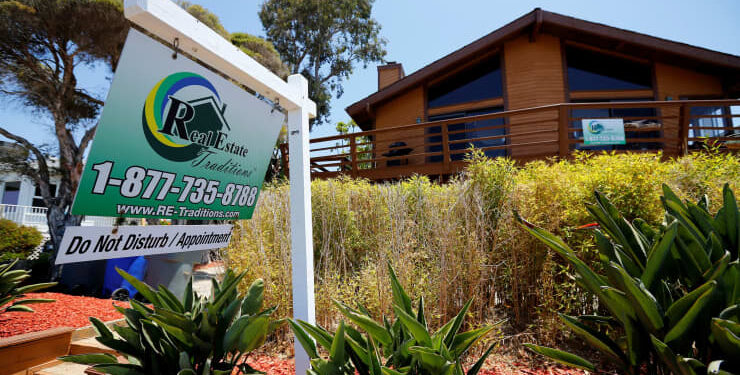 The average contract interest rate for 30-year fixed-rate mortgages with conforming mortgage rate balances ($647,200 or less) decreased to 4.09% from 4.15% for loans with a 20% down payment.
After rising steadily for months, mortgage rates made a U-turn last week, and borrowers jumped to take advantage. The crisis in Ukraine rattled financial markets and caused a run on the relatively safer bond market. Yields fell and mortgage rates followed.
The average contract interest rate for 30-year fixed-rate mortgages with conforming loan balances ($647,200 or less) decreased to 4.09% from 4.15%, with points remaining unchanged at 0.44 (including the origination fee) for loans with a 20% down payment, according to the Mortgage Bankers Association. The rate was 83 basis points lower one year ago.
As a result, demand for refinances jumped 9% last week compared with the previous week, but application volume was still half of what it was the same week one year ago, when rates were lower.
“Mortgage rates dropped for the first time in 12 weeks, as the war in Ukraine spurred an investor flight to quality, which pushed U.S. Treasury yields lower,” said Joel Kan, an MBA economist. “Looking ahead, the potential for higher inflation amidst disruptions in oil and other commodity flows will likely lead to a period of volatility in rates as these effects work against each other.”
Applications for a mortgage to purchase a home increased 9% from the previous week but were 7% lower than the same week one year ago. Homebuyers are less sensitive to weekly rate moves, and the jump in demand was likely due more to increased supply hitting the market for the spring season. Slightly lower mortgage rates didn’t hurt of course, especially given how high home prices are now.
“The average loan size remained close to record highs, with higher-balance loan applications continuing to dominate growth,” added Kan.
cnbc.com reports that mortgage rates surged back sharply to start this week, jumping more than 25 basis points in just two days, according to Mortgage News Daily. Investors are moving away from bonds, causing yields to rise, despite the ongoing crisis in Ukraine, which caused rates to drop at the outset.
“While the Ukraine situation does indeed drive demand for bonds, the associated inflation implications are simultaneously pushing demand away,” wrote Matthew Graham, chief operating officer at Mortgage News Daily.
“The net effect was a move back up to the highest mortgage rates since early 2019.”