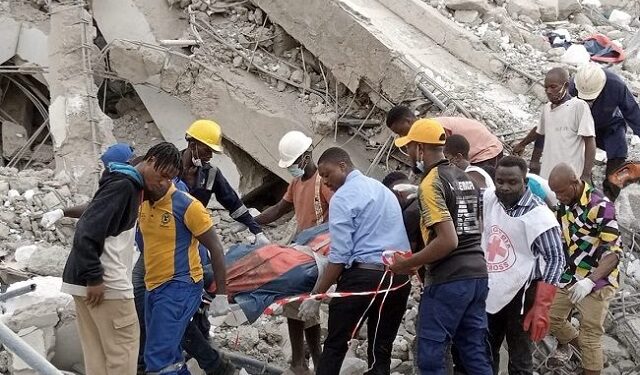 The Lagos State government has given an update on the ongoing rescue operation at the site of the Monday building collapse in Ikoyi.

A total of nine persons have been brought out alive from the rubbles, the Deputy Governor, Dr. Obafemi Hamzat, said at the scene on Tuesday.

However, Hamzat, in the company of cabinet members, said 10 bodies were removed from the rubbles after an overnight search and rescue operation by a combined team of Lagos State Emergency Management Agency (LASEMA) and National Emergency Management Agency (NEMA), with the support of construction giants, Julius Berger and China Civil Engineering Construction Company (CCECC).

The actual number of people trapped in the collapsed uncompleted structure remains unknown at the time of the Deputy Governor’s visit, but Hamzat said some of the workers interviewed gave the figure between 24 and 28.

Three of nine persons evacuated alive have been discharged from the hospital. The victims were being treated at Lagos Island General Hospital in Marina.

Hamzat said: “Our search and rescue operation is ongoing to remove those possibly still trapped under the rubbles. Our focus right now is to get people out alive. This morning, we took out two people alive and they are responding well to treatment in the hospital.

“We have evacuated nine people alive and three of them have been discharged. We have also sadly taken out 10 dead bodies. We believe there could be more people trapped in the building but all our efforts are focused on rescue.”

Hamzat condemned what he called “needless gathering” of people who had nothing to do with the rescue operation at the scene, stressing that their presence was distracting those involved in the search efforts.

“What is currently happening at the site of the incident is a search and rescue operation. It is not so good to have a lot of people at the site. Sometimes, the rescuers require silence to be able to hear the voices of those who may still be trapped. The operation is ongoing and we hope we will be able to rescue more. We will not leave the site until we can account for everyone in the building,” Hamzat said.

The deputy governor disclosed that the collapsed structure had been sealed off by the State Government last June because of a low structural integrity test and demanded the anomaly be corrected before the construction could be allowed to go on.

He said the project manager was being expected to report back to the Government on details of the correction before the incident.

The deputy governor assured the public that the full investigation ordered by Governor Babajide Sanwo-Olu would yield an outcome that would lead to the next line of action.

Hamzat, in the company of Commissioners and Permanent Secretaries, visited the Lagos Island General Hospital to see victims being treated.